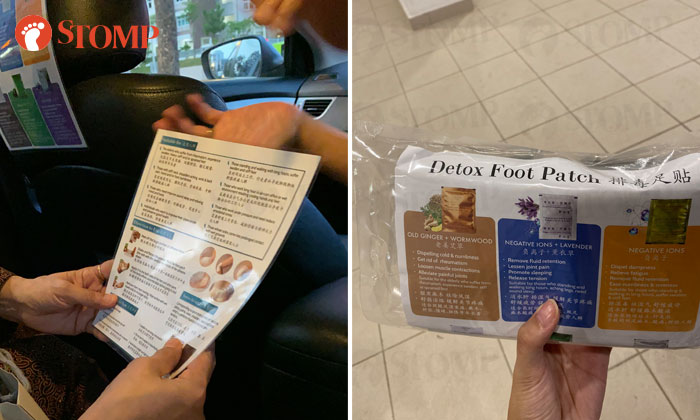 Stomper Nur was frustrated after encountering a Grab driver who allegedly pressured her into buying detox foot patches during her ride.

She had booked a ride from Westgate shopping mall to Bukit Batok on Nov 30 at about 6.30pm.

"It was not a long journey but it felt draggy enough," she said.

"Upon entering the car, the driver started pointing at an ad he had placed at the back of the car seat for detox foot patches.

"He subsequently handed over a hard copy of the ad stating the benefits.

"At the back of my mind, I thought that these things are sold for like $2 online and I don't need it and don't want to buy it."

However, Nur said the driver continued to promote the benefits of the product throughout the ride and "refused" to take back the ad from her.

He also kept telling her to take down his contact number.

"The entire conversation was so uncomfortable and he did not seem to understand that a customer's 'no' means no.

"At the end of the hellish trip, he offered me a plastic bag with the item inside without actually asking me if I am buying it and just assuming I'm getting it.

"He had a few more stocks in his car ready to sell to other passengers too.

"His expression changed when I shook my head and said thanks, trying to end the conversation.

"I was about to take my leave when he insisted to 'just buy from me one time'."

Nur said she felt pressured by the driver's "desperation" to close the deal and paid for one pack even though she did not want to.

Nur said that she has since reported the matter to Grab.

"Are Grab drivers allowed to sell products to their customers during their trips?" she asked.

"I just want to raise awareness to others who take Grab out there.

"Vulnerable groups of women or children tend to buy on impulse when pressured.

"It is not fair for them and I reported the matter to Grab immediately."

Grab did not respond to Stomp's queries by press time.

Related Stories
Pizza Hut investigating after woman allegedly gets burnt pizza in 'mouldy' box
Woman buys $85 hamper for sick mum, gets charged $116 for item that looks nothing like ad
Diners scolded by Bedok drink stall assistant for not ordering from him, NEA looking into alleged touting
More About:
grab
bad service