Is this a scam? Facebook friend offers man $300 to help him apply for new phone line 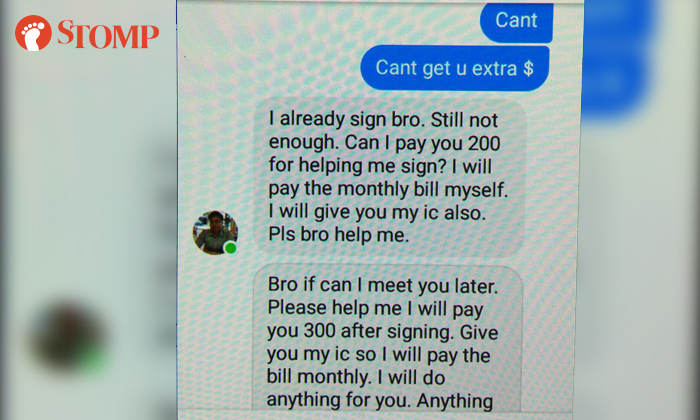 On Dec 21, Stomper Kurt was contacted by a Facebook friend, Alan Er, who sought a loan from him before offering him $300 to sign

Wei stressed to Stomp that he does not know Alan and that they were simply friends on Facebook.

The conversation transpired when a Alan Er contacted Kurt out of the blue to chat him up claiming, "I'm a nobody just a fan of yours always see you Facebook for a few years".

After inquiring more about Kurt's background and finding out that he works in security, Alan said that he sees that Wei "works so hard to achieve his goals" and that he was "already a role model" to him.

They then chatted for a while before Alan went on to say that his wife was pregnant. 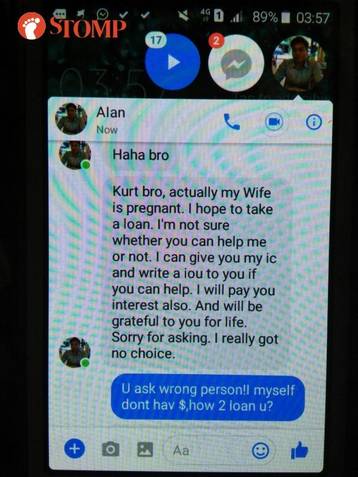 He asked if he could take a loan from the Stomper to which he declined as the Stomper himself "doesn't have money".

Multiple text messages later and Alan told the Stomper if he could sign a mobile line for him, claiming that he would pay the monthly bills himself.

He even offered to give his IC and address to the Stomper so that he could not "run away".

The man then continued insisting that his wife needs the money and that the Stomper need not pay anything. Wei did not reply. 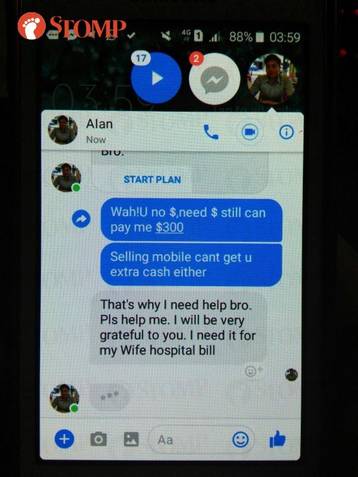 Alan then guilt-trips the Stomper, saying, "Kurt bro, I really thought you can do (me) a favour. I thought you always kind, always helping other people. But there's no reply from you."

The Stomper then told him that he is "not stupid" and to "go scam other people".

Alan then apologises, adding,"Bro if you can't help just let me know. I not forcing you, pls don't say ppl scammer. (sic)"

Does this sound like a scam to you? View the full conversation the Stomper had with Alan in the gallery above.

Related Stories
Man surprised to find over $1,000 deducted from bank account for iTunes transactions he never made
Facebook scam exposed: Ex-colleague whose account was hacked claims he got $110,000 "for free"
Stomper 'orders' 3,000 iPhones from seller who offered 'buy 2 get 1 free' promo
More About:
scam
facebook