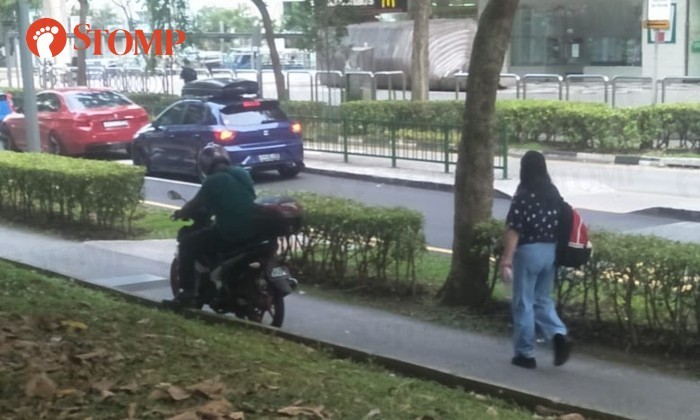 Even if it were a shared path, motorcycles are not allowed.

A motorcyclist was seen on the pavement where pedestrians were walking near Block 180 Lompang Road in Bukit Panjang on Sept 30.

Sharing photos of the incident, Stomper Raven said that it happened at 8am opposite Bukit Panjang Plaza.

"The motorcyclist was riding dangerously on the walkway with pedestrians still walking," recounted the Stomper, who added that the rider stopped to wait for a friend on the footpath.

"Students and school children are often seen in the morning walking there. Do watch out and be safe!"

According to the Land Transport Authority, offenders could be fined up to $2,000 and/or jailed for up to three months for using a motor vehicle on public paths.

"l hope the authorities will take action against such an irresponsible rider," said the Stomper.