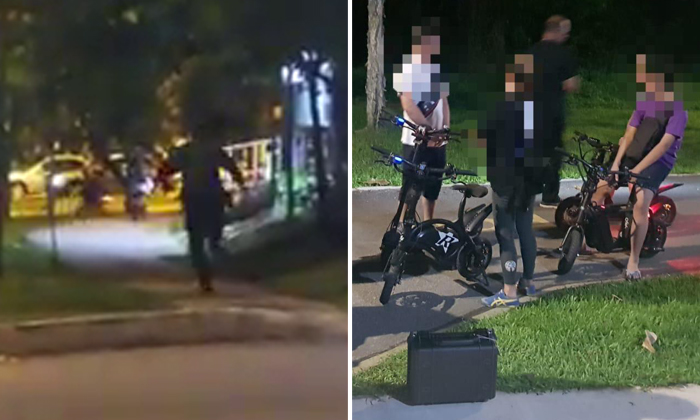 More than 20 offences including speeding and using non-compliant devices were also detected during the operation, said the Land Transport Authority (LTA) in a Facebook post on May 18.

The operation involved more than 60 plainclothes officers from the Singapore Police Force and National Parks Board, as well as LTA's Active Mobility Enforcement Officers (AMEOs).

Of the 11 devices impounded, one weighed close to 60kg, which is nearly three times the weight limit.

In the video captioned 'IPPT gold runner', officers can be seen chasing after PMD users on foot.

LTA also said in its Facebook post that there were 3,700 active mobility offences detected from May 1, 2018 to April 30 this year.

The authority added: "We will not tolerate those who disregard public safety and have been ramping up our enforcement efforts."

View more photos of the enforcement operation in the gallery.

Related Stories
Victim of e-scooter accident calls for ban of PMDs at at void decks, lift lobbies
E-scooter user riding in middle of the road doesn't know the law or simply doesn't care?
So dangerous for woman to ride PMA in middle of the road near Tan Tock Seng Hospital
More About:
pmd
e-scooter
e-bike
lta