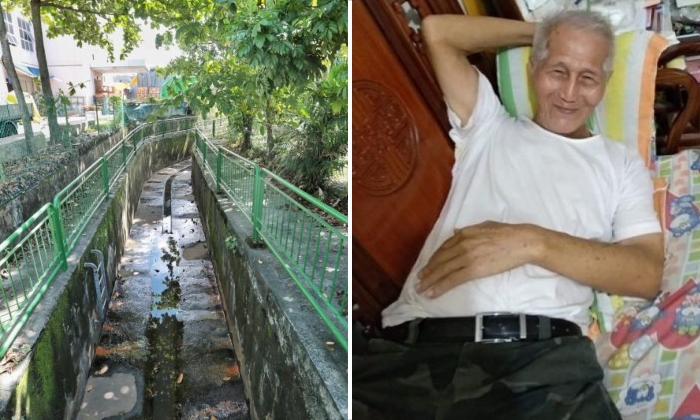 He parked his lorry in a heavy vehicle carpark and headed to a drain behind the lorry to relieve himself.

There, the lorry driver spotted the body of Mr William Leck Swe Chua, an 80-year-old who had been missing for three days.

On the first day of the coroner's inquiry on Friday (Aug 26), investigating officer (IO) Freddy Tan ruled out foul play and said Mr Leck's death could have been accidental.

Mr Leck, who had dementia, was found in the drain in Hougang on Jan 3 this year.

IO Tan said the police received a call from the lorry driver at about 7pm saying he had spotted a body in a drain.

Police and Singapore Civil Defence Force paramedics who arrived at the scene, near 42 Defu Lane 7, found the body in an awkward position, said IO Tan.

He added that Mr Leck was in his underwear and a vest, while his T-shirt was rolled up to his neck area.

The body was extracted at about 10pm that night.

Mr Leck, who had been reported missing, was identified following a fingerprint analysis.

IO Tan said a meteorological report from the National Environment Agency showed that it was raining in the three days prior to the body being found.

There were no signs of trauma on Mr Leck's body, he added.

A search of the carpark turned up Mr Leck's bermuda shorts, wallet and mobile phone. The phone was faulty but data could be extracted from its SIM card.

With Mr Leck's son working in China, IO Tan said an officer spoke to the dead man's granddaughter, who said she last saw him in December 2021.

None of Mr Leck' relatives was present in court on Friday.

The IO said Mr Leck's female partner had told the police that when she woke up on the morning of Jan 1, she found she was alone in their flat and assumed he had gone to the coffee shop.

The duo reportedly lived in a unit at Block 313 Hougang Avenue 5.

When she came back from work and found that he had still not returned, she called him a few times, starting at 3pm, and he said he was on his way back.

Closed-circuit television footage at the heavy vehicle carpark showed that at around 3.20pm, Mr Leck had already walked in and out of the location seven times, and he was last seen at about 4.30pm heading towards the drain.

There was no answer when Mr Leck's partner tried calling him at about 7.30pm that day.

Medical reports showed that Mr Leck was diagnosed with cancer in 2011 and he later suffered from dementia, a disease where individuals lose various aspects of their cognitive functions such as memory, and thinking or reasoning abilities.

State Coroner Adam Nakhoda asked IO Tan to seek more details from Mr Leck's partner about the phone calls she made to him on the day he went missing. The case will be heard next on Sept 12.