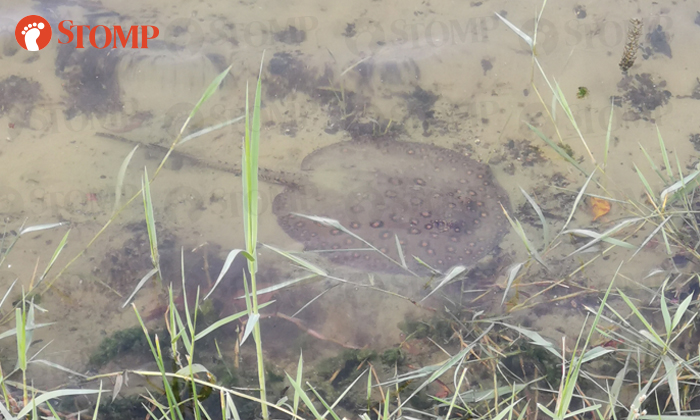 Having worked around Lower Peirce Reservoir for six years, Stomper Edward was surprised to note the sudden appearance of Motoro stingrays there.

Edward, who started noticing the non-native creatures in the reservoir around a month ago, said: "I was surprised because I've been there for years and I haven't seen these fishes before.

"I came across them when I walked near the banks of the reservoir."

On Christmas Day (Dec 25), Edward took several photos and videos of the stingrays in the water, which he then shared with Stomp.

He told Stomp: "There were seven Motoro stingrays, each about two-feet-long and with the body size of an average-sized plate.

"In the videos, you can hear some people talking about something that they are seeing in the waters too," added the Stomper.

"They could have been referring to the Motoro rays too. If so, then the number of stingrays in the reservoir could be multiplying at an alarming rate.

"I learned from the news that these rays are foreign fishes, which explains why I haven't seen them before."

"I hope I can help in a small way by sharing this information."

Edward is not the only one who has reported seeing non-native stingrays at Lower Peirce Reservoir.

A man previously told Lianhe Wanbao that he had spotted around 60 stingrays there and expressed concerns about them upsetting the water's ecological balance.

According to another regular visitor of the reservoir, people often went there to release and fish for stingrays.

In a media statement, the Public Utilities Board (PUB) said it would be conducting investigations and removing the stingrays.

All fishing activities at Lower Peirce Reservoir and Upper Seletar Reservoir have also been suspended until further notice.

"Our reservoirs and waterways serve, first and foremost, as a source of water supply, and PUB’s core interest is in safeguarding Singapore’s water quality and ensuring water safety.

"PUB will be conducting investigations and removal of the stingrays.

"As a precaution, PUB will suspend all fishing activities and close designated fishing grounds at Lower Peirce Reservoir and Upper Seletar Reservoir until further notice. We advise the public to exercise caution at the reservoirs.

"PUB works with NParks and AVA to raise public awareness on the harmful impact of releasing animals into reservoirs and waterways through 'Operation No Release'.

"We also remove non-native species such as the Motoro stingray (Potamotrygonidae motoro) that pose a danger to water users.

"Since 2015, PUB has removed 75 Motoro stingrays (Potamotrygonidae motoro) from our reservoirs and waterways.

"It is an offence to release any animal including fish into reservoirs and waterways in Singapore. Those caught doing so are liable to prosecution under the Public Utilities (Reservoirs, Catchment Areas and Waterway) Regulations, and may be fined up to $3,000."

View more photos from Edward in the gallery.

Related Stories
'Invasion' of around 60 stingrays at Lower Peirce Reservoir
Youths fishing at Merlion Park have been identified and will be counselled: PUB
Man catches anglers fishing and people cycling illegally at 3 nature reserves
More About:
animals
fish
fishing
illegal