'Invasion' of around 60 stingrays at Lower Peirce Reservoir 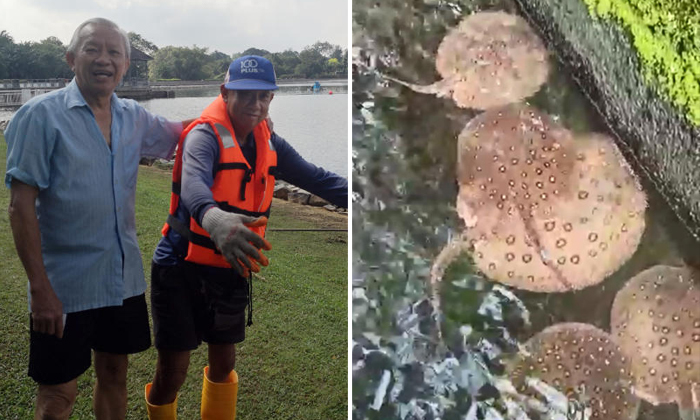 Mr Zhang Weilun, 40, was strolling along a ditch at a more serene part of the reservoir when he saw around 60 stingrays swimming in the water.

Shocked, he filmed a video and sent it to Lianhe Wanbao.

He also expressed concerns that the Motoro stingrays would multiply and upset the water's ecological balance.

Wanbao reporters visited the scene on Wednesday morning (Dec 19) and found that the area in question was quite isolated.

They also saw a signboard by the Public Utilities Board (PUB) along that stretch, stating that fishing is prohibited and that offenders face a fine of up to $3,000.

Mr Huang Hongguo, a 70-year-old retiree who was cycling at the reservoir as part of his morning exercise, said that people often came here to release and fish for stingrays.

According to him, the stingrays have multiplied greatly in the past four to five years and he estimated that there are 'hundreds' of them in the entire reservoir.

Local reservoirs are a hotspot for illegal fishing, reported Wanbao. On average, around 180 people are caught fishing illegally at reservoirs every year.

There are 17 reservoirs in Singapore, of which 10 -- including Lower Peirce Reservoir -- have designated fishing spots.

To find out more about rules and regulations for fishing at selected reservoirs, members of the public can refer to PUB's website.