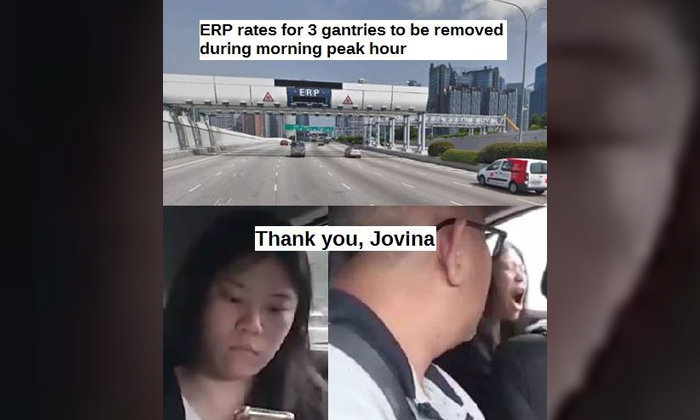 If the internet's theories were to be believed, we all have viral Go-Jek passenger Jovina to thank.

In case you haven't read the news over the past two weeks, Jovina and her driver Kamaruzzaman Abdul Latiff's filmed conversation on Jan 29 took over the web for days.

She had raged at him for incurring ERP charges during the journey, eventually escalating to accusations of kidnap and racism.

According to her, her regular trips from Bishan to Coleman Street in the morning don't pass any ERP gantry, but Kamaruzzaman, who recorded the ride on his phone and made it public, protested that it's impossible.

Many commenters questioned whether $1.50 was worth the way the argument unfolded.

In (probably) unrelated news, LTA then said yesterday (Feb 11) that two gantries on the Marina Coastal Expressway will stop charging vehicles before 8am.

The two are located before Maxwell Road and Marina Coastal Drive towards the Ayer Rajah Expressway.

A third gantry, along Upper Bukit Timah Road, will be shut down completely.

With a hopefulness we wish we possess, some people believe Jovina's viral ordeal compelled the authorities to create a toll-free road for her to enter the city.

The Bukit Timah one obviously has nothing to do with her.

Not everyone is ready to switch to Jovina's side though. Just like the Go-Jek incident, some still credit the driver for this ERP-related news.

In case you're wondering, Jovina's Go-Jek journey, which began at 7.10am, could indeed have avoided ERP.

One can travel through Toa Payoh, the Pan Island Expressway and Nicoll Highway, or via Thomson Road.

Last we heard, Kamaruzzaman has met LTA as part of their investigation. Neither he nor Jovina seemed open to a meeting to resolve the conflict, reported The Straits Times.

An online petition to LTA to not revoke the driver's license collected 65,500 signatures.