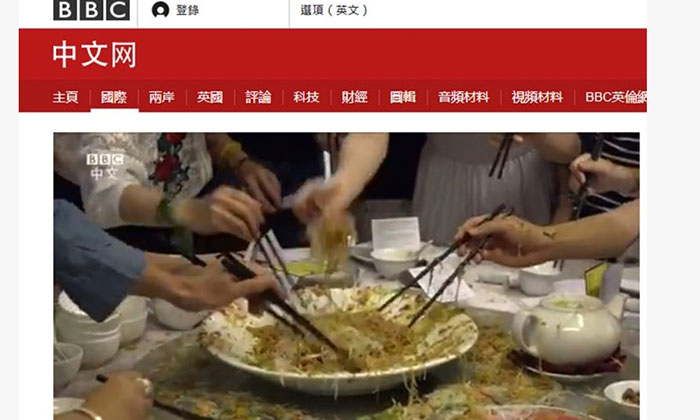 Netizens have reacted to footage of a group of people having a lo hei, shared by English broadcaster BBC, with some criticising as a ‘wasting food’.

On its Mandarin website, BBC posted an article on the lo hei culture in Singapore and Malaysia, reports Shin Min Daily News.

The article read that friends and family would gather during lo hei to ‘toss’ the various ingredients.

The higher the ingredients were tossed, the more auspicious it was deemed.

During the process, some of the ingredients were thrown off the plate, dirtying the table.

Since the video aired, many netizens from Hong Kong, Taiwan, and Japan have criticised the lo hei culture.

Some denounced the culture, calling it a ‘waste of food’.

Others commented that they did not understand the culture, and chastise the people involved for ‘playing with food’.

In response, many in the local food and beverage industry explained that lo hei is a ceremonious tradition unique to Singapore and Malaysia.

The act of tossing the ingredients signify the act of ascending to greater heights.

Moreover, the activity serves to liven up the atmosphere, and should not be considered a waste of food.

A spokesman for the Restaurant Association of Singapore (RAS) said:

“Everyone will gather at the table with their chopsticks during the lo hei session. They will say auspicious lines as they toss the ingredients.

“This serves to lift up everyone’s spirits as well as the celebratory atmosphere during Chinese New Year.”

With regard to people ‘haphazardly throwing’ ingredients out of the plate, the spokesman said that this purely depends on the individual involved.

Moreover, most restaurants will limit the ingredients given, so very rarely will there be ‘food all over the table’.