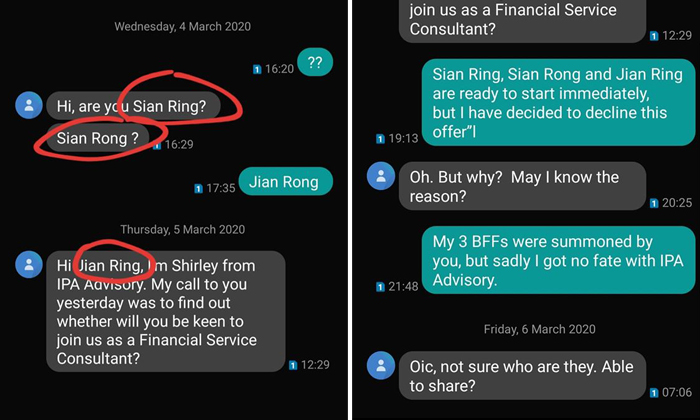 It can be a little infuriating when people are unable to spell or pronounce your name right (as this writer can attest to).

So imagine how one Facebook user felt when a recruiter from an insurance firm misspelled his name three times even after being corrected.

In a post on March 5, Facebook user Teo Jian Rong shared screenshots of his conversation with the recruiter, Shirley.

Shirley was following up on a call with Teo to ask if he was interested in joining her company as a financial services consultant.

However, she addressed him as 'Sian Ring', 'Sian Rong' and 'Jian Ring'.

When Teo responded, "Sian Ring, Sian Rong and Jian Ring are ready to start immediately, but I have decided to decline this offer," Shirley appeared clueless about her error.

Even after a further quip by Teo about his "3 BFFs", Shirley remained confused and said, "Not sure who are they. Able to share?"

In his post which has since garnered over 1,700 shares, Teo wrote: "Here's why insurance agencies need to re-train & upskill their agents (don't even mention about closing sales)."

He also said: "I've reached out to her and offered to provide free consultation & copywriting. Let's improve the service quality & customer success of SG's insurance industry."

In one screenshot, Teo can be seen apologising to Shirley for his "rant" as well as applauding her confidence and "hustle spirit".

It is unclear if Shirley took up Teo's offer or if she responded after that.

The insurance company, IPA Advisory, did not respond to Stomp's queries but issued a response on its Facebook page on Tuesday (Mar 10).

"We believe to err is human and being kind and compassionate in return paves the foundation for success," said the company.

"We have since communicated with Shirley and the individual and believe this matter is in good order.