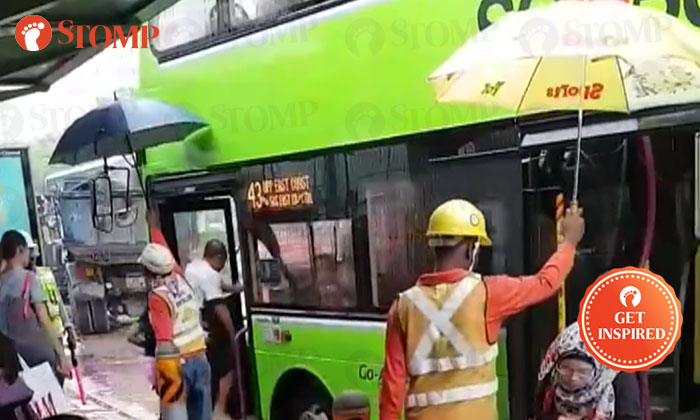 Stomper Winson was touched when he was shielded from the rain by a foreign worker as he was alighting from a bus at a bus stop opposite Block 323B Sengkang East Way on May 28 at 10am.

He later realised that the worker, along with two of his colleagues, actually took time out from their break to shield commuters who were boarding and alighting from the buses. 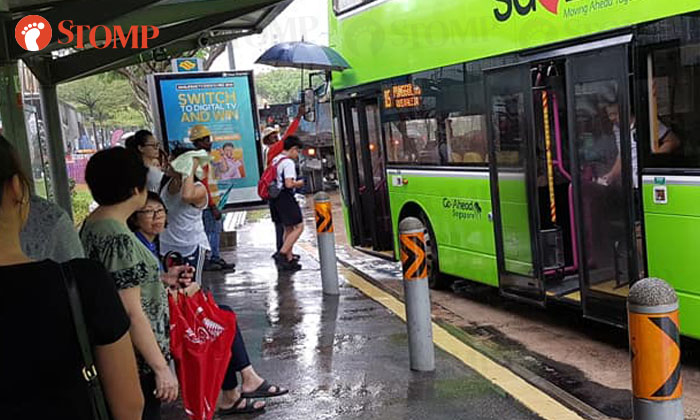 Winson took to social media to highlight their act of kindness.

Winson said that since he had left home without an umbrella that morning, he was prepared to be drenched by the downpour as he alighted from the bus.

However, Winson was pleasantly surprised when he realised that he did not feel any rain at all.

Winson told Stomp: "I looked up to see a foreign worker holding an umbrella over my head, and I was very, very touched." 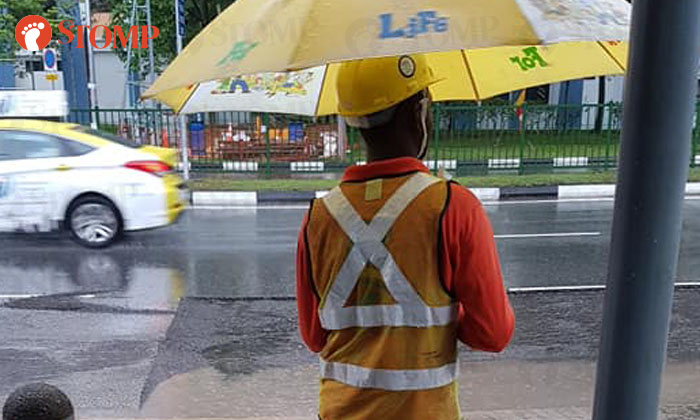 "I thanked him and he just gave a shy and slightly awkward smile.

"I was very touched by such acts of kindness which means a lot to me, and their actions truly speak volumes about their love for others."

Winson initially thought that this was part of the workers' job scope, but as he was crossing the overhead bridge, Winson realised that there were 20 other foreign workers who were resting and just chatting amongst themselves.

"This meant that the three workers were not obliged to do this, they had every reason to rest like all the others when there is a downpour."

Intrigued by the actions of the three workers, Winson stayed behind to observe them.

"One foreign worker was stationed at the entrance of the bus and another was at the exit. With every incoming bus, they would shelter those boarding and alighting," said Winson. 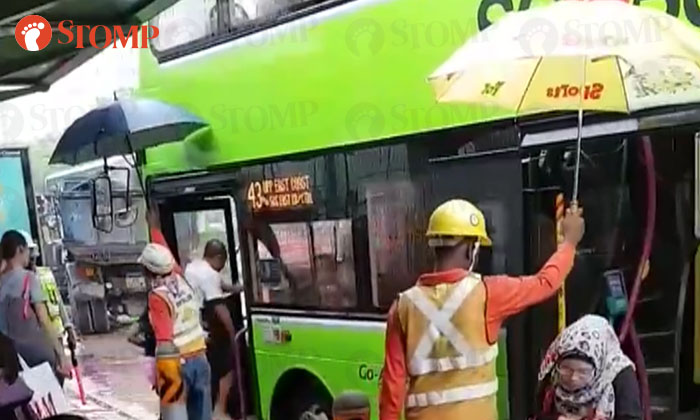 "This is definitely my first time seeing something like this.

"Their consistency is really amazing, it takes selfless love and a big heart to do that because usually, one would only do this for a short period of time.

"But to my amazement, I can still see them consistently sheltering people even after an hour's interval. I believed that they must have done it for the past few hours since it has been raining constantly, and it is really touching to see such a scene."

Hence, Winson took a video of the workers' act, as a reminder to himself to "do good as well".

Being overwhelmed with appreciation, Winson went on a search for the three workers after they resumed their duties when the downpour subsided.

"I only managed to find the one who sheltered me, since I saw his face most clearly.

"I went to thank him and told him how much I appreciated his actions, and showed him the video that I took of him. He just smiled a little embarrassedly again.

"People usually only do good deeds because they are told to do so, but the workers' posture and attitude tell me that they are really willing to do this."

Winson then bought four 1.5L bottles of 100 Plus for the workers to share, not just for the three who were sheltering the commuters but for the rest of their colleagues as well.

"I am just really amazed by their acts of love.