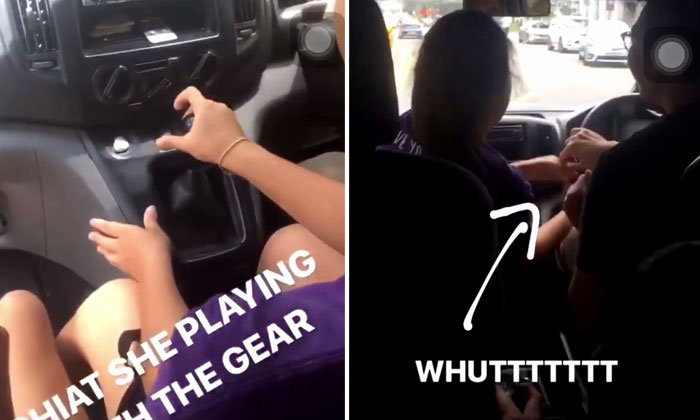 A teenage girl was seen in a series of Instagram Stories grabbing a gear stick and turning a steering wheel while her friend was driving.

This is the latest in a spate of videos recorded of youths committing stupid, and sometimes dangerous, acts.

A video compilation of the short videos was posted on ROADS.sg's Facebook page on Monday (Jan 14). However, it is unclear where or when this incident took place.

According to the post, the youths were in a van.

In the video, the girl is seen sitting precariously between the driver and passenger seats with her hands on the gear stick.

She is instructed on how and when to shift gears by her friend driving the vehicle.

When she does it, her friends cheer and applaud her.

She is also later seen taking control of the steering wheel from the passenger's seat as her friends continue to egg her on.

"This InstaStory could easily end up as Instant Sorry," the post's caption read.

"A vehicle is not a toy to be used this way.

"There are other road users that you are putting in harm's way."

Netizens agreed and slammed the youths for being reckless.

Related Stories
Youth slicing canopy of Lorong Halus bridge: 'Should his parents pay for damages?'
Boy crashes ofo bike into wall and posts video on Instagram: "I wanna get trended so badly"
Is there a point to this? Youth sets cardboard on fire at void deck while being filmed
Another stupid act caught on Instagram: Cyclist with death wish stops in middle of the road
More About:
Youths behaving badly
dangerous driving
dangerous