Inspiring Teachers Awards: Ms Wong heard me out when my grandma died and my parents divorced 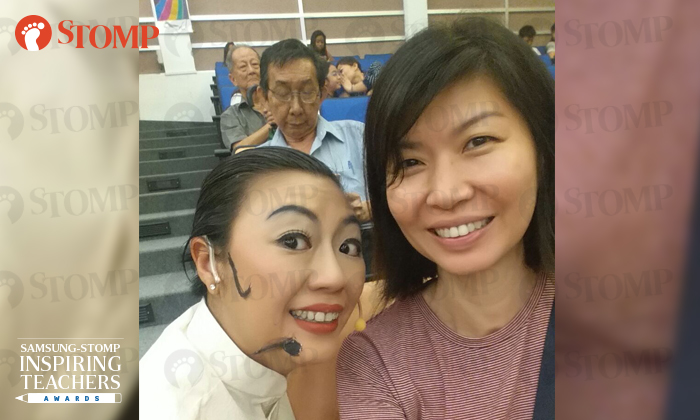 When she lost her beloved grandmother to cancer and after her parents filed for divorce, all Justine wanted was to be heard.

This simple act of listening touched Justine more deeply than anything, and she still remembers it today, even though it has been almost 30 years.

"When I turned 13, the comfortable world I was living in came to an abrupt halt. Grandma was diagnosed with end-stage lung cancer and within nine months, I had lost this mother figure of mine. Shortly after, my parents filed for divorce.

"At that time, life did not seem to have any meaning for me. Grandma was my mother figure, my companion, my perfect ultimate Cantonese chef and she was gone just like that. Whatever seemingly functioning family I might have had was also gone with the divorce.

"I couldn't see any light at all. Everything did not give me any meaning. It was just routine doing what I needed to do but it was all meaningless.

"It came to a point where the heaviness was too much to bear and I needed to talk to someone. Being an only child, I don't have an older sibling to talk to. Furthermore, I hardly get to spend time with my parents, so needless to say, they were not an ideal option too.

"I don't know why but I decided to write to my teacher, Ms L Y Wong (who used to be my Food & Nutrition teacher at the now defunct Braddell Secondary School).

"I wrote about my situation, my hopelessness, my sadness. I think at that time, I just needed someone to 'hear' me out.

"And she did. She wrote back to me.

"She made some observations about me that I was surprised that she even knew it at all, considering the fact that our interaction in a school week was just that few hours. She gave some advice and suggestions for my situation.

"It's being almost 30 years since the day I wrote to her. I honestly can't remember what she wrote. But it's the fact that she chose to 'hear' and respond to me that matters to this very day. Her act of hearing me, of understanding my feelings had pulled me out of my darkness, my hopelessness. It may also had stopped me from doing something stupid.

"Someone once said, 'To be understood is the greatest kind of love'.

"Having been a recipient of being heard and understood, I think I have subconsciously become a listener like her. People whom I have just met were able to share their situation with me. Most of the time after such un-orchestrated meetings, I will hear this: 'I feel much better after talking to you'.

"Just a simple act of hearing can make another person feel better, able to see the light at the end of the tunnel.

"I thank Ms Wong for hearing me that day. I hope I have paid it forward by listening, as just a simple act of hearing can turn darkness into light.

"PS: Now that we are no longer in a 'Teacher-Student' relationship, we tekan each other like normal friends do.

The contest is now closed and winners will be contacted shortly.