Inspiring Teachers Awards: Life was a deep dark abyss of despair but Mdm Badral made me feel at home 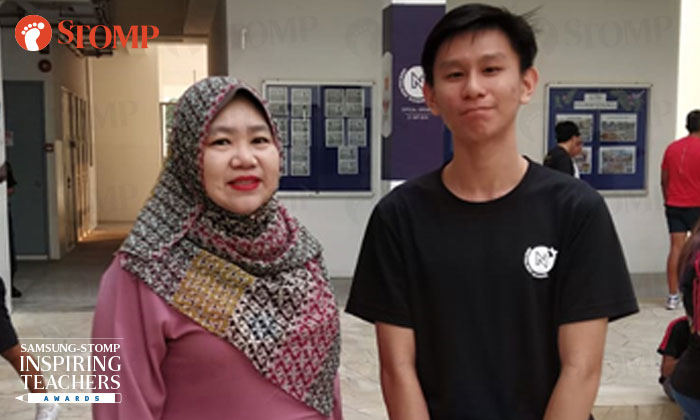 Growing up, Presslee has faced many setbacks but the Northlight School student is grateful to his teacher Mdm Badral for helping him to overcome the challenges in his life.

Here is Presslee's entry for the Samsung-Stomp Inspiring Teachers Awards:

"First, I’d like to start with a little backstory before I even joined Northlight.

"At the age of 7, like all other children, I was enrolled into a Primary School. It was that very same year, however, that I had to drop out of school due to some family problems at the time.

"At first, I was exhilarated! A life without school would simply be awesome, I never thought, that would be something that changed several years down the road and I would soon come to regret it dearly.

"For many years, I spent my life in isolation, hidden away from the world, feeling insignificant and miserable about myself, feeling insecure whenever I saw other children at my age, schooling.

"This greatly affected me, especially, when I was around 13.

"It was at that juncture, that I knew I really wanted to go to school, yet I couldn’t, hence, I started to look for a job instead, wanting to do something for myself.

"I would eventually land my first job and was ecstatic at first, but little did I know, this was the beginning of greater pain and sorrow for me.

"I had to constantly face children of my age who were schooling and was forced to realise the inadequacy of my handful of knowledge, as compared to their entire world of it.

"I was bullied by my employers, who would force me to work, using the fact that I didn’t go to school to exploit me, saying I wasn’t tired and that I could keep working.

"It was the same wherever I went to work next. Life was a deep dark abyss of despair for me back then and my future was as bleak as a sheet of white.

"Unable to see a future for myself, I began to give up, accepting it as my fate. I continued working hard at my job at the time, until one day when I got home and my parents broke the news to me that there was in fact, a school willing to accept me if I could pass the entrance test.

"I was genuinely delighted beyond words and of course, I went for it. The name of the school, is none other than Northlight School.

"Upon passing the entrance test, I was successfully enrolled into the school and told that I would begin as a third year student in a retail class.

"I began my first day at school the following week, not knowing anything about school life, feeling really strange.

"It was then, that I met this fantastic form teacher of mine and she goes by the name of Mdm Badral Bte Abdullah.

"In the beginning, I was really excited to go to school every morning, but as time went by, I started to realise that I couldn’t adapt to school life as well as I had thought before.

"It was hard getting to know the other students as I was immensely shy.

"During this time, my form teacher would do everything in her power to make me feel more comfortable. She would have chats with me almost every chance we get in school, in the morning during our class family time, during recess and lunch periods and even after school.

"She was constantly encouraging friendships between me and other students.

"It wasn’t long before, however, that I started to feel as if I wasn’t improving anymore like I did in the first 2 months, I wasn’t moving forward as fast as I thought, and that frustrated me, along with the thoughts of how difficult it was to adapt.

"I was ready to leave the school approximately 5 months after I joined, to chase after a personal goal.

"However, after my form teacher implored and pleaded with me not to throw my future away, I reluctantly decided to stay and complete my last year of school. By this time, I actually realised that I already have many friends in school and it wouldn’t have been possible without my form teacher’s help.

"In the beginning of my fourth year in school, I made a very different, yet bold decision, which was to run for president of the Student Council.

"Doing this in an effort to help my confidence level grow further.

"My form teacher of course, supported me all the way and even asked my classmates to support me as much as they could too. She would check with me from time to time about the progress of the nomination and selections, encouraging me every step of the way.

I was thrilled when I eventually succeeded, but, I wasn’t ready for the challenge at the time, I realised I didn’t know anything about the Student Council and that I had to learn from scratch.

"During this time, my form teacher would advise me almost daily, sharing stories of the challenges she had faced in life with me as a form of encouragement as well as advice.

"Thanks to her, I eventually learnt the ways of the Student Council and that’s where I thought that things would get better, but I was not yet expecting the number of obstacles I would have to face.

"It’s definitely not easy being a Student Councillor, not to mention being the president.

"There were times when I had to appear arrogant and bossy and I really didn’t like this at first, in fact, I hated it.

"I went home every day feeling lousy as I did the year before. Then It suddenly struck me that despite what the students may think of me, my form teacher will always be there to support me. Which she did the moment I shared my unhappiness and uncertainties with her.

"She told me that, all I ever need to know, is that I’m doing the right thing and that I need not worry about other unnecessary things. Hence, I eventually learned to let go and moved on with my life in school, trying my best in the Student Council in order to make things better.

"Which brings me to my next point, if it were not for my form teacher, I may have never survived the past 2 years in school.

"Without her constant encouragement, guidance, kindness and care, I would have quit school a long time ago.

"It was solely because of her presence in school that I managed to breakthrough all the negative influences and thoughts that would have swallowed me up.

"Life has definitely not been easy for her, yet she is always able to get back on her feet and rise up to the challenge.

"Whenever I felt lost or wanted to give up, all I needed to do, was recall the stories my form teacher shared with me and I would feel like I’ve gained a lifetime of strength to get back up and face my challenges.

"She has made sacrifices for my class that, I dare say, not many teachers’ would be willing to. She is truly an inspiration to me and a someone I admire and respect greatly.

"She has guided me through my dark times and allowed me to feel at home at a place that was so foreign to me.

"She has helped me to grow from a shy boy who would never approach a single person in the past, into the current president of my schools Student Council.

"I will be eternally grateful to my hero of Northlight School, Mdm Badral Bte Abdullah."