Inspiring Teachers Awards: I was bullied, joined a gang and was caned -- but Mr Pang is the candle in my life 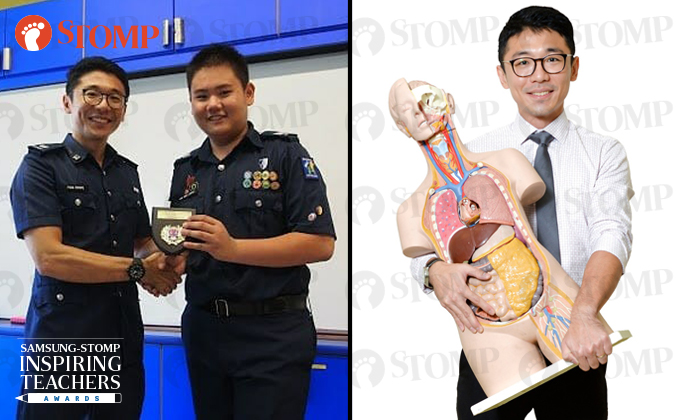 Initially on a wayward path fraught with struggles and challenges, Wei Yong decided to change for the better because of Mr Ronnie Pang, who never gave up on him.

The 16-year-old Ang Mo Kio Secondary School student shared how he joined a gang in search of friendship and protection, got into fights and threatened his peers into giving him protection money.

However, it was wise words from his science and National Police Cadet Corps (NPCC) teacher, 36-year-old Mr Pang, that helped to turn Wei Yong's life around.

"Since the first day of school, I have met with lots of difficulties and challenges as I was bullied and did not mix well with my classmates.

"Soon after, I met Mr Ronnie Pang who was my science teacher. Strangely, the first time I saw him, I felt a strong positive vibe from him and was happy when I saw him. He was very friendly with a big smile on his face.

"Coincidentally Mr Pang was also the NPCC teacher. When I met him at the NPCC booth during the CCA Open House in 2014, he immediately recognised me and introduced me to Ang Mo Kio Secondary School's NPCC unit.

"During Secondary 1 and 2, I had very bad and difficult days as I was often picked on.

"Although I had a few good friends who supported me back then, they were afraid of bullies and hence did not talk to me anymore.

"I was lonely and I chose the wrong route; which was to join a gang to search for friendship and for protection. I went for fights with my schoolmates and even threatened my classmates to give protection money.

"After Mr Pang knew about what I was doing, he spoke to me calmly and promised to help resolve the issue together instead of scolding me harshly. He persuaded me to leave the gang and mediated the situation between me and my classmates.

"Even after that, I continued to get myself into countless fights and was involved in many disciplinary cases.

"However, he never once gave up on me and tried to help me further by counselling me, coaching me in my studies and guiding me on how to make the right judgement and decisions in life.

"Despite his help, I continued getting into many issues and did not change as I was hot tempered and impulsive.

"Hence, I asked him a question: 'Why do you keep helping me, are you not afraid that you will fall into a deep hole whereby there are no results but just a waste of time?'

"He simply replied 'no' and said that:

'As long as there are small improvements in you and no matter how small, it will be worth it and my time will not be wasted.'

"Recalling the time that I was about to be caned by the school disciplinary master, he told me not to commit an offence again and added:

'Even after this incident, I will not give up on you and I believe that you can do it.'

"This line touched my heart and hence, until today, I never gotten into any disciplinary cases as I have decided to change for the better.

"No matter what trouble I have gotten into, he will be the first one to be at my side and never leaves me. He is just like my second father as he protects me like his own.

"He invited me to join him in the school gym, and we had lunch together after that. He spent a lot of time with me during NPCC events.

"In NPCC, he gave me many opportunities to perform for school and community events. In some NPCC events that are held out of school, he even booked a taxi for just the two of us to ensure that I was not over-exhausted after the events and for my safety.

"All in all, Mr Pang is that kind of teacher that in emergency times, I will trust him fully.

"He never fails to brighten up my day and he is always here for me. He taught me the values that I should uphold, he taught me valuable lessons and lifelong skills.

"Whenever I have problems, be it academically or socially, I will approach him as he is friendly, has an open heart, and is a good listener.

"He teaches students from the heart and not from the book. He allowed me to see my future brightly. He is like a candle and would brighten up my future."

Mr Pang told Stomp that he has been teaching for eight years.

When asked why he continued to stand by Wei Yong despite everything, he responded: "I did not give up on Wei Yong because I see that he is a boy who is kind and earnest in nature.

"He just needed some guidance with managing his interaction with his friends and his temper. Also, he is willing to keep improving himself."