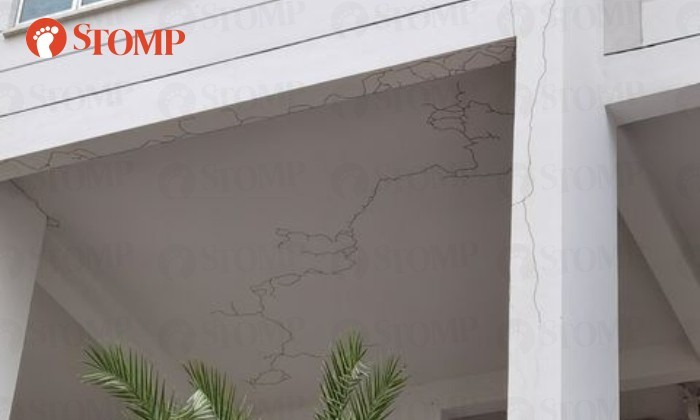 The insect trails on the high ceiling at the void deck of Block 208C Punggol Place are inactive after pest control carried out treatment in August this year, said Pasir Ris-Punggol Town Council.

A Stomper was concerned when he saw what he thought were cracks on the ceiling on Sunday (Oct 11) at 6.30pm and shared a photo to Stomp.

"These look like cracks and they seem pretty severe," the Stomper said.

"I only noticed this on Sunday (Oct 11) and I have yet to inform the town council.

"I just thought that this issue is rather worrying!"

In response to a Stomp query, Pasir Ris-Punggol Town Council clarified that the trails on the high ceiling at the void deck of Block 208C Punggol Place are not structural cracks.

The spokesman added that the trails are already inactive.

"As the ceiling is five storeys high and we are unable to reach the high ceiling to remove the dead trails, we have therefore arranged with our Repairs and Redecoration (R&R) contractor to remove it and repaint the ceiling during the on-going R&R project for the precinct," said the spokesman.

"The building is still structurally sound."