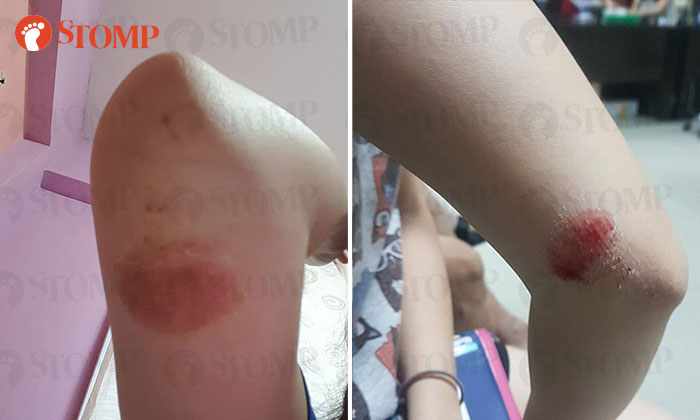 Stomper JY is looking for witnesses to an accident involving a white Suzuki Swift and an e-scooter, which happened at a zebra crossing near Admiralty MRT Station on Jul 11, 2017, at around 6.50pm.

JY who was on her e-scooter said she had waited for the car to stop before attempting to cross the zebra crossing.

However, the car suddenly started moving, before stopping again.

According to JY, the driver had been playing with the vehicle’s throttle which led to the accident.

Said JY: "The driver alighted his vehicle and asked to settle the matter privately."

The driver’s girlfriend also alighted the vehicle and helped JY up.

JY added: "I was in shock and pain.

"Although my mum and my nephew were behind me on a bicycle, she did not see what happened as she was preoccupied caring for my nephew, a toddler.

"She couldn’t have done much either as she doesn’t speak much English."

The driver’s girlfriend also told JY that she was a nurse, and the two offered to bring her to a clinic for treatment.

When they reached the clinic, they exchanged contact details while the driver’s father came down, telling JY to lodge an accident report with the Police.

The trio left without paying for JY’s the medical fees.

Although JY tried calling the driver, he did not answer his phone.

When she went to lodge the report, JY was told by the investigating officer that the driver had not filed a report yet, and that they could not proceed with the investigation of the case.

He suggested that she contacted the driver herself to ask him to file an accident report.

JY lamented: "I know the injuries I suffered are minor, but I’m serving as cabin crew now and I can’t afford to have scars.

"Moreover, I had to pay for my own medical fees even though it wasn’t my fault.

"The driver told me he just got his licence 10 days ago before the accident.

“Really hope someone can help me!"

JY's boyfriend also added: "Although the injuries suffered were minor, it was the actions of the driver that was absolutely irresponsible. It could have caused more harm."

"Do we allow such reckless driving on the road?"