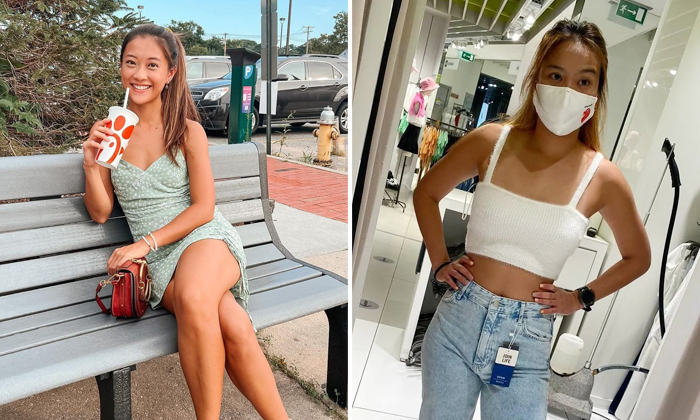 A dispute between social media influencer Rachel Wong and part-time nurse Olivia Wu has been resolved amicably after Ms Wu apologised for a series of Instagram stories and withdrew her statements.

Ms Wu had in December 2020 posted six Instagram stories titled "Cheater of 2020", suggesting that Ms Wong had been unfaithful to her former husband, footballer Anders Aplin.

Ms Wong's lawyer, Mr Akesh Abhilash from Harry Elias Partnership, told The Straits Times on Wednesday (Aug 17) that he was pleased that the dispute was resolved amicably "with (his) client's reputation being vindicated" by the apology and complete retraction of the allegations.

He took over the case on July 5 after a High Court judge dismissed Ms Wong's appeal to withhold diary entries and correspondence between her and two men Ms Wu accused her of being intimate with.

Ms Wong - communicating through her lawyer - said she accepted Ms Wu's apology and added: "I am glad that we can now move forward with our lives."

In an Instagram story post on Wednesday, Ms Wu said that her comments towards Ms Wong, whom she did not know personally, were unnecessary and apologised for the hurt she had caused the influencer. 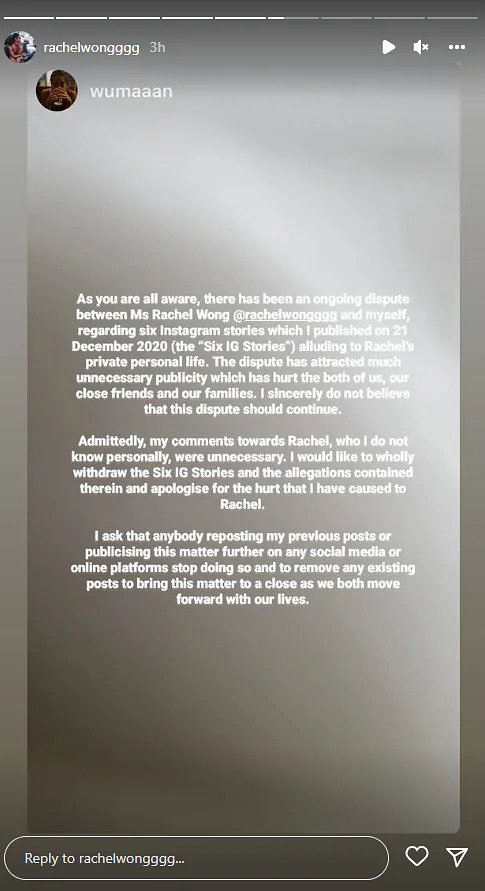 "The dispute has attracted much unnecessary publicity which has hurt the both of us, our close friends and our families. I sincerely do not believe that this dispute should continue," wrote Ms Wu.

The terms of the resolution were settled out of court and are confidential.

Ms Wu published the disputed Instagram stories while Ms Wong and Mr Aplin were in the midst of a marriage annulment. The proceedings began in April 2020 and their marriage was legally annulled around March last year.

Ms Wong claimed the stories damaged her image and reputation on social media, which she was largely dependent on "to attract and obtain business deals on partnerships" to earn a living.

The influencer argued that the stories meant that she had sex with her wedding emcee on her wedding night and that she was promiscuous, among other things.

Ms Wu had claimed that the stories were true and that Ms Wong had been "more than intimate" with at least two men while she was in a romantic relationship with Mr Aplin.

Ms Wu's lawyers, Mr Gerard Quek and Mr Daniel Ling from PDLegal, told ST on Wednesday that their client is happy that the matter has been resolved and urged that the parties be allowed to move on.