"Influencer" brags about getting driver drunk in Bali on Instastory 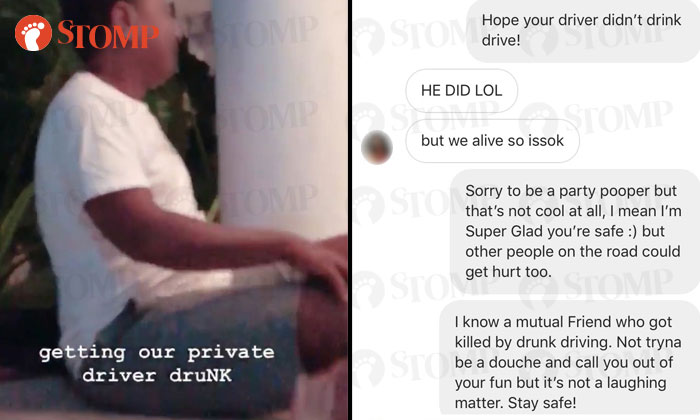 An "influencer" posted a series of Instagram Stories (Instastories) bragging about how she had gotten her private driver drunk and recording the car ride while the driver appeared to be driving under the influence.

A Stomper alerted Stomp to the Instastories and shared screenshots of the videos that had been posted on July 10.

Since Instastories expire after 24 hours, she could not share the original videos.

"M is an influencer whom I follow on Instagram and I saw that she went to Bali and started getting her driver drunk," the Stomper said.

"I thought it wasn't right so I said something but she proceeded to post another Instastory."

At publishing time, M has over 16,000 followers on Instagram.

M replied that he did but said that "issok" because she and her companions were alive. 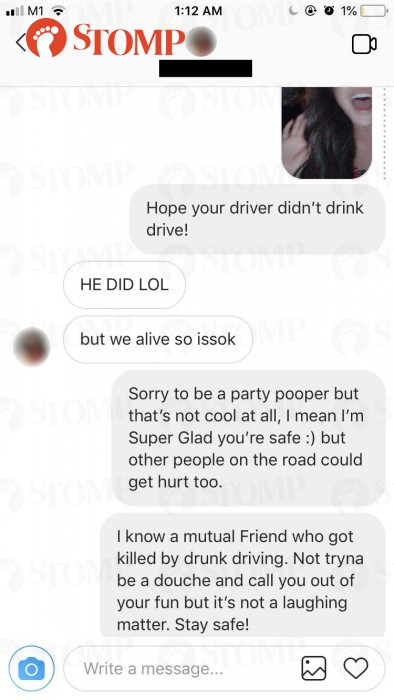 The Stomper then apologised for being a "party pooper" before warning M of the dangers of drink-driving and telling her to stay safe.

The Stomper added that she decided to report this incident because she and her friends had advised M to be careful of what she posts online and reminded her that drink-driving is an offence.

"She neither saw nor replied to the messages," said the Stomper.

"Clearly, she took it as a joke because she used her next story to mock the fact that they were drink-driving."

In a screenshot shared by the Stomper, M posted a video with the caption, "drunk driving 101". 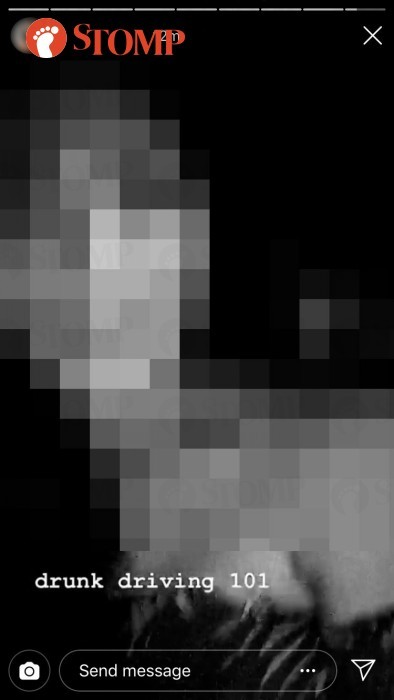 "It's not a laughing matter," said the Stomper.

This is not the first time influencers have been called out on posting videos of reckless behaviour.

Last month, a driver was driving at 192km/h with a woman taking a video of him and egging him on.

The woman posted the videos, including a close-up shot of the speedometer, on her Instastories with the caption: "If your man cannot do this, he's not worthy to be your man".

Related Stories
Woman takes video of driver going 192km/h and says: "If your man can't do this, he's not worthy to be your man"
Driver, 38, arrested in Yishun for suspected drink-driving
23-year-old driver arrested for drink driving after crashing car and abandoning it at Hougang Ave 7
More About:
instagram
influencer
drink-driving
dangerous
reckless