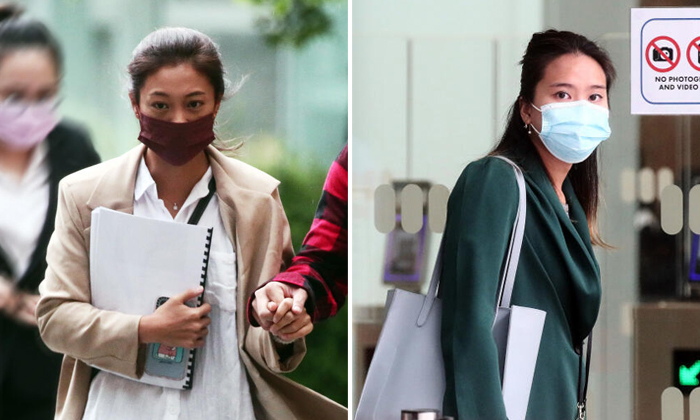 A social media influencer has failed in her legal bid to stop another woman from obtaining correspondence between her and two men she is accused of being intimate with.

The influencer, Ms Rachel Wong, had appealed against a State Courts' order to provide such documents to Ms Olivia Wu, whom she is suing for defamation.

But High Court judge Choo Han Teck dismissed the appeal in a judgment on Tuesday (June 28), holding that the information sought by Ms Wu to bolster her defence had been proven by her to be relevant and material for the lawsuit.

The court's decision is the latest development in the ongoing lawsuit between the two women, which involves several stories posted by Ms Wu on her Instagram account in December 2020.

Titled "Cheater of 2020", the stories suggested that Ms Wong had been unfaithful to her former husband Anders Aplin.

Court documents did not spell out the relationship between Ms Wu and Ms Wong.

Ms Wu, a part-time nurse who works in a pharmaceutical company, is reportedly acquainted with Mr Aplin's current girlfriend.

The stories were published while Ms Wong's marriage with Mr Aplin, who is a footballer here, was undergoing annulment proceedings.

They were married in December 2019, but their marriage was legally annulled around March last year. The annulment proceedings started in April 2020.

Ms Wong later sued Ms Wu, claiming that the stories had caused her to suffer damage to her social media reputation and image, on which she was largely dependent "to attract and obtain business deals on partnerships" to earn a living.

The influencer argued that the stories - when read together with their title - meant that she had sex with her wedding emcee, Mr Alan Wan, on her wedding night and that she was promiscuous, among other things.

In her defence, Ms Wu claimed that the stories were true and that Ms Wong had been "more than intimate" with at least two men while she was in a romantic relationship with Mr Aplin: her gym trainer - a Mr Han - and Mr Wan.

To support her case, she applied for a court order to obtain correspondence between Ms Wong and the two men. She also sought Ms Wong's diary entries relating to Mr Wan.

In his judgment on Tuesday, Justice Choo noted that Ms Wu's lawyer Gerard Quek had submitted to the court photocopies of text messages depicting "lurid details" from a person named Chen Xuan Han. These messages did not show their recipient.

Mr Quek had also produced a copy of a journal entry purportedly from Ms Wong professing her love for Mr Wan, along with a photograph of the influencer lying on a man's chest - allegedly the wedding emcee.

"From the exhibits that the defendant has produced, there is reason to believe that similar other entries may be found," said Justice Choo.

"And if the diaries are produced but no such entries are found, then surely that should strengthen the plaintiff's case at trial."

He noted an argument by Ms Wong's lawyer Clarence Lun that Ms Wu was on a "fishing expedition" in the hope of finding any useful documents to bolster her case.

"In this case, samples of relevant material had been produced and, just to extend the fishing analogy just a bit more, it is not a mere fishing expedition if fish has in fact been spotted," he said.

Justice Choo also disagreed with Ms Wong that Ms Wu's application for the court order was scandalous and vexatious.

The correspondence sought may be proven to be scandalous, but only because of the nature of the subject matter of the defamation, he said.

"By a combination of Instagram-speak and the utter failure of counsel to translate that into English, (Ms Wong's) statement of claim is filled with chaff," he said.

"That, I suppose, entitles her, in her estimation, to be a celebrity," he said.

Related Stories
'YOLO mood, peer pressure': Titus Low and influencer Cheryl Chin engaged after 6 hours of dating
Businessman will no longer get $1.12m from ex-mistress -- and has to pay her $45,000
Widow who sued sister-in-law for calling her 'rotten' sought $4m in defamation suit, got $40k
More About:
court
affair
blogger
influencer