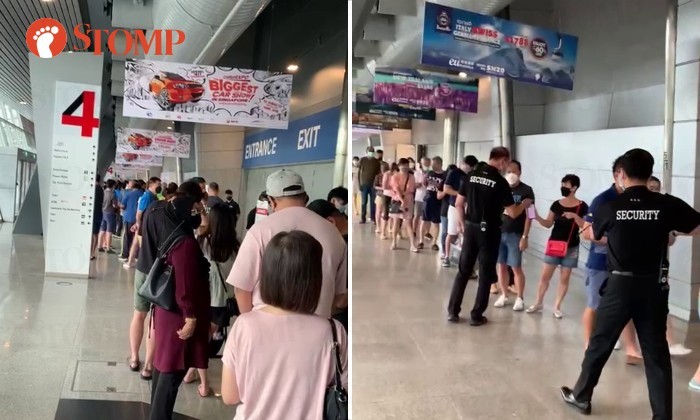 With prices going up and up, you would expect people to be tightening their belts.

But to Stomper Francis, that is not the case, judging by the long queues he saw for the car show and travel fair at Singapore Expo on Saturday (Aug 13).

Both the Cars@Expo and National Association of Travel Agents Singapore (Natas) events returned for the first time over the weekend after a two-year hiatus due to Covid-19.

Sharing videos of the snaking lines, the Stomper said: "Most were there to collect freebies at the car show for the first 1,000. At Natas, people didn’t mind queueing because of 'revenge holidays'. Many were smiling and waiting patiently."

'Revenge holidays' or 'revenge travel' is people travelling with a vengeance to make up for the lack of travel during the pandemic.

"People are complaining of the high cost of living and possible recession," said Francis. "But just look at the queues. What recession are we talking about with so many people ready to spend?

"Despite the high COE (Certificate of Entitlement) prices, people are queueing at the car show to look for good offers. It’s the same at Natas. Prices of package tours have gone up, but people are desperate to travel and queue to enter.

"The mood at the Expo demonstrates that the majority are not affected by job insecurity and price increases. They still have the disposable income to splurge and yet complain that money is not enough and hope that our Government will give more handouts."

The Stomper himself was at the car show to buy a Toyota.

"Guess what?" he said. "No stock! Must wait till November. The 50 units arriving in October were already pre-sold! Indeed, inflation? What inflation? There are many who complained about the high cost of living but think nothing when it comes to paying more than $150k for a car."

Asked whether inflation has affected him, Francis, 65, told Stomp: "I retired at 59 when I achieved financial independence because I married early to bring up my kids who are now independent. I started financial planning after national service, taking advantage of my long runway. I worked hard and saved.

"Now I am enjoying the fruits of my labour and enjoying life with no worries. I don’t bother about inflation."

If only all of us could be so fortunate.