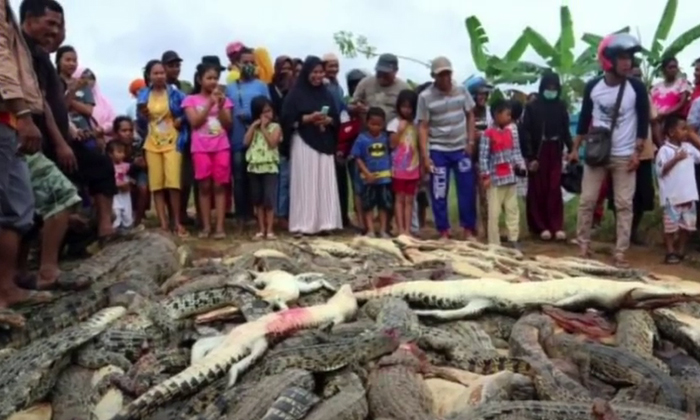 All 292 crocodiles at a farm in Indonesia were slaughtered by a mob of around 600 villagers on July 14 -- an act of revenge for the death of their fellow countryman.

The farm, a licensed sanctuary that breeds endangered crocodiles, is located in the Sorong district of West Papua.

According to the Washington Post, a factory worker, identified as Sugito, had wandered into the farm while collecting grass for his cattle when he was attacked by a crocodile.

Although guards heard his screams, it was too late by the time help arrived.

Following the 48-year-old's funeral and burial, villagers barged into the sanctuary and tore apart its office.

Armed with weapons including machetes, hoes, clubs, hammers and knives, the group descended on the crocodiles.

The animals, both adults and babies, were bashed and hacked at, while some were pulled out of the water and had their mouths tied "so they were helpless against what came next."

Even though about 40 police officers tried to stop the massacre, the crowd -- which had swelled to around 600 by then -- were an unstoppable force.

"We couldn't do anything. We were outnumbered. The situation was so tense," Sorong Police Chief Dewa Made Sutrahna told ABC News.

With every single crocodile in the farm dead, the villagers dragged their carcasses into a pile and took pictures.

No arrests have been made, reported the China Global Television Network.