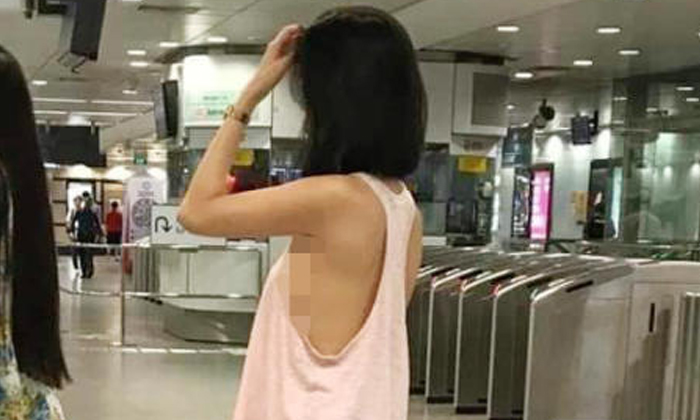 A woman who found herself talk of the town after photos of her in a skimpy outfit went viral online has responded to criticism by netizens.

Ms Ashley Garcia, who identifies herself as a freelance model from the Philippines, was seen queueing for an automated teller machine (ATM) at Somerset MRT station in a thin tank top.

Photos of Ms Garcia and her eye-catching attire were posted on social media on Saturday (Feb 9).

While some netizens felt that there was nothing wrong with Ms Garcia's dressing, others were quick to slam her and call her outfit 'obscene'.

On Tuesday (Feb 12), Ms Garcia confirmed with Stomp that she was the woman in the photos.

In a Facebook post that she sent to Stomp, Ms Garcia wrote: "I was not aware that somebody took a photo of me (I don't personally know his purpose).

"I apologise if I [have] offended any culture [with] this outfit, but, please understand that I [did] not have any obscene or malicious intention by wearing it. I am sorry if you think that this was 'indecent exposure' but it was not my intention.

"To those people who are already hitting me below the belt and criticising me, I respect you. You are already telling things which are too personal [and] that is already outside of what you see in the picture."

Ms Garcia also clarified that she had been wearing shorts and nipple tape at the time of the incident.

"I was cyberbullied and harassed because of this [incident]," Ms Garcia told Stomp, adding that she hopes the person who posted her photos online can "apologise publicly".

When asked further about the incident, she declined to comment.