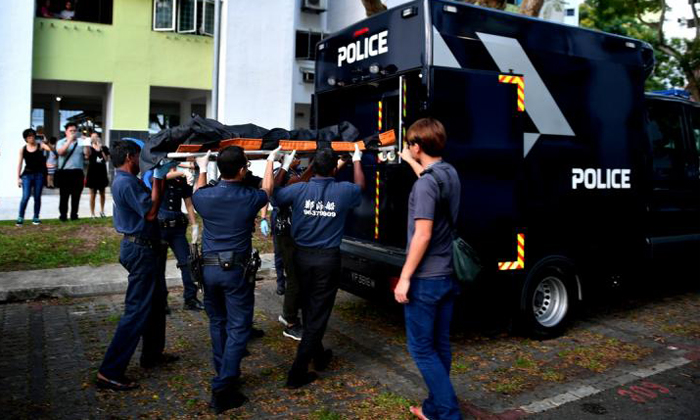 Update: The maid was arrested today (Feb 14) on suspicion of murder.

He had just finished praying in his Tampines home when he heard screams from a neighbouring flat yesterday afternoon.

When Mr Ashaari Hasan Basri, 27, ran out to investigate, he saw a maid crying loudly in a unit two doors away.

When she saw him, she rushed to the gate to get his attention, sounding distraught.

Mr Ashaari told The New Paper: "She tried to talk to me, but I couldn't understand what she was saying. I tried to calm her down."

When he looked into the four-room flat from a window, he was shocked to see his elderly neighbour, a 77-year-old woman, sitting motionless in a wheelchair.

"I saw a 20cm-long kitchen knife stuck in her throat," said Mr Ashaari, who also noticed blood on her clothes and the floor.

He then called the police and ambulance service. They arrived at Block 276 at Tampines Street 22 within five minutes.

Mr Ashaari added: "The maid was already calling the family. She let me into the flat because the daughter wanted to talk to me. I told her what happened and to get here as soon as possible."

He said the daughter arrived about five minutes after the police and thanked him for telling her what happened.

Other family members also gathered at the fifth-storey flat. They declined to speak to reporters.

Neighbours told The Straits Times that the woman, believed to be Madam Tay Quee Lang, lived with her husband, who is in his 70s, and their Indonesian maid, who started working there only about a month ago.

Mr Ashaari said the husband was not home when he went to the flat. He is not sure how many children they have, but knows of a son and a daughter.

They lived in the flat until recently when they got married and moved out.

Mr Ashaari remembers Madam Tay as a friendly neighbour. He said their families are quite close, having lived there for more than 30 years, since 1984.

His mother, Madam Ainon Ali, 56, said the woman was active before suffering a stroke, and started using a wheelchair after a fall last year.

"She's always very friendly, and I always see her husband at the market," she added.

The police said they received a call for assistance at 2.10pm yesterday. They found the body of a woman in the flat.

She was later pronounced dead by paramedics at the scene.

The New Paper understands the maid was taken away to help with investigations. No one has been arrested.