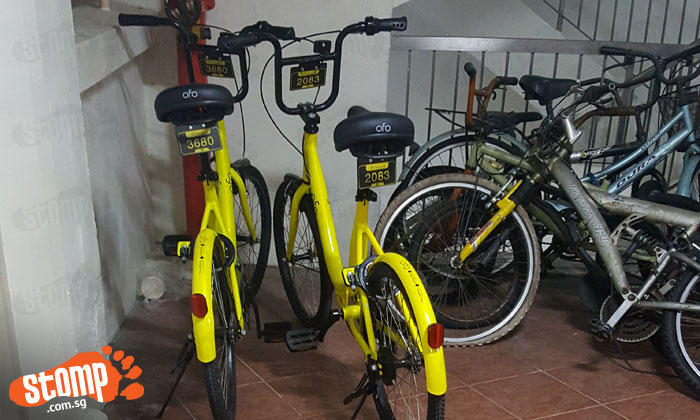 The misuse and abuse of ofo bicycles that are meant to be shared continue, this time at Block 124 Yishun Street 11 and Block 111 Edgefield Plains.

A Stomper, who saw two ofo bicycles parked in the common corridor on the third storey of the Yishun block, is amazed at the selfishness of those who take advantage of the bicycles.

"I saw two boys taking the ofo bicycles into the lift to the third storey and after one hour, they did not come down," said the Stomper.

"I went up to check and I saw them locked there.

"People who have been taking advantage of these free bicycles, please do not be selfish. Think of other residents too. We want to ride the bicycles too.

"I am sure in the future future, we will be need to pay just because of these selfish people."

Stomper Lee, who came across a similar sight in Punggol, added: "I have seen this innovative bicycle sharing scheme to be abused by Punggol residents at Block 111 Edgefield Plains.

"This is a behaviour not to be condoned as I saw the bike outside the house for more than five days.

"Is the resident the owner of the company or does he want to encourage more of the same behaviour to be exhibited by friends?"

Ofo is one of three companies offering bicycle sharing services for the public.