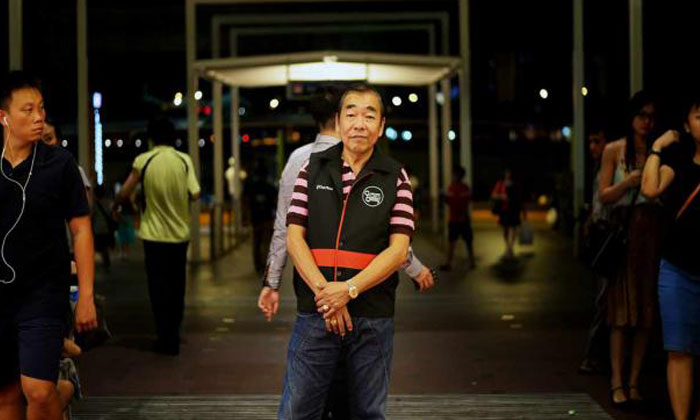 Wearing a black vest, he patrols the perimeter of Jurong Point Shopping Mall.

His mission? To educate members of the public about the need to return trolleys after shopping.

Last month, the supermarket chain rolled out its latest effort to hold on to its trolleys. "Trolley enforcement officers" will inform customers that action will be taken against shoppers who wheel trolleys away from the mall.

The Jurong Point store sees around 150 to 200 cases of trolley abandonment each day, one of the highest for FairPrice supermarkets. Mr Yow, 62, says: "If we don't start enforcing this now, the situation will not get better."

The New Paper on Sunday observed him spending about 10 minutes talking to two customers who had insisted on taking a trolley home.

They eventually "lost" the argument and stormed off carrying their bags of groceries by hand.

Mr Yow says: "They knew about the scheme and even said that they have seen the pamphlets. They even admitted to taking a trolley home a few days ago.

"They were angered by the fact that they could it do it then and not anymore."

In situations like these, Mr Yow says all he can do is stay calm and patiently explain the situation to the customer.

But he reckons "we have to be harsher on this now so that we can enforce it".

So far, he has stopped about 30 people, most of whom live nearby.

He says: "They usually say things like 'I see many trolleys under my void deck, I will leave mine there', or that it is more convenient for them to wheel the trolleys back to their blocks instead of carrying everything by hand."

But customers should not fret, adds Mr Yow.

"They can easily buy personal trolleys from FairPrice to help them take their groceries back home, or they can call someone down to help them carry the groceries," he says.

"If they are young and able-bodied, it should be no problem for them and they can't be living too far away."

He feels that the people who take the trolleys usually do it out of habit.

Mr Yow says: "Some customers recognise us now and they will try to leave from another exit with their trolleys, or wait for us to walk away."

During each four-hour shift, he spends more time at the "hotspots".

He says: "I know where people can try to sneak the trolley past us.

"The 'value' of a trolley to a single person may be 50 cents or a dollar, but to FairPrice, it's thousands of dollars altogether."

About the trolley enforcement project

Over the past two years, 1,000 trolleys have been lost from over 90 stores each year.

This led to an estimated $150,000 spent on replacin and retrieving the abandoned trolleys.

The pilot Trolley Enforcement Project aims to educate the public on responsible trolley use and deter trolley abandonment.

A total of 10 trolley enforcement officers patrol the perimeter of the malls in shifts throughout the day.

Since the scheme was introduced, FairPrice has seen an 80 per cent drop in the number of trolleys collected.