Not the sharpest tool in the shed: Man caught stuffing axe under his t-shirt at Tampines shop 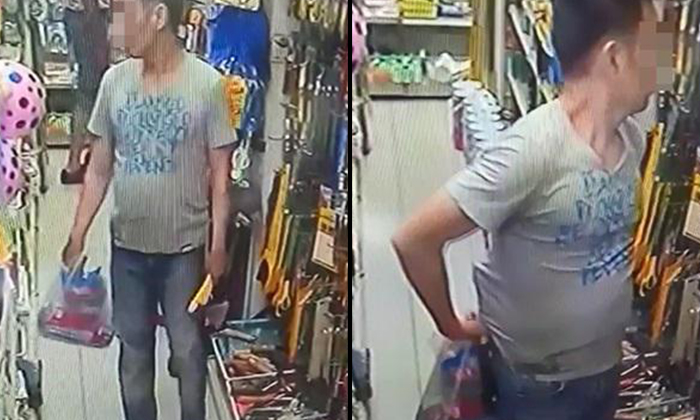 Instead of taking essentials like food or drinks, a man tried stealing an axe from a convenience stall.

The actions of the man were captured by a CCTV in the store.

The 32-year-old store owner told reporters that the man looked to be in his forties and had attempted to steal an axe, costing $12.90.

Fortunately, he noticed something amiss and stop the man in time.

The owner then showed reporters a footage from the CCTV while narrating the man’s methods.

According to the footage, the man first took the axe, and scanned around nervously.

Upon confirming that there was no one around in the immediate vicinity, he tried stuffing the axe under his shirt, and took large strides towards the exit.

Little did he suspect that his actions were being monitored by the store owner.

“I long suspected him, so I stood by a counter further away and observed his movements through the CCTV.”

He also said that he had quickly snatched over the axe to ensure their safety.

The man attempted to flee once the owner had seized the axe, but after hearing him talked about calling the cops, got afraid and attempted to turn back, only to turn tail and run again.

The bizarre actions of the man left the owner bewildered and stunned.

He told reporters that since it was the man’s first shoplifting attempt in his shop, he would forgive him, but he tried stealing from him again, he would let the police handle the case.