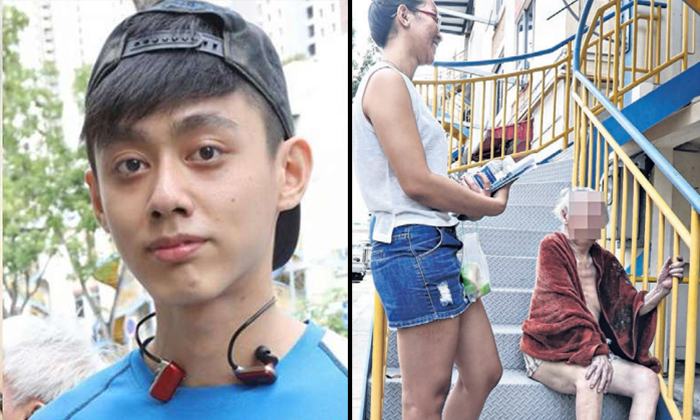 ​An 87-year-old retired artist was carried down three storeys by two brothers in order to escape a fire on Sunday (Nov 6) at 8am.

This was after the screams of the elderly man's daughter alerted the brothers living on the fourth floor, reported Lianhe Wanbao.

The fire occurred at around 8am at a third-floor unit in Block 178, Toa Payoh Central. The elderly man, Mr Lee Guo Qun, told Wanbao that at the time, he was reading his newspapers in the living room and his daughter was in her room, while their maid was out of the house.

He suddenly smelled something burning and saw smoke entering into the unit through the main door.

"When I opened the door to take a look, I saw the corridor in flames and thick smoke. It really scared me," he said to Wanbao in Mandarin.

He immediately informed his daughter and the two tried to make their way to the stairwell via the side of the corridor. However, his mobility was limited as he was on crutches.

Mr Tan Sheng Cheng, 23, who lives on the fourth storey, was going down the stairs when he heard Mr Lee's daughter shouting for help. He was with his younger brother Sheng Hui, 21.

The older Mr Tan told Wanbao: "I used both hands to grab the uncle's arms. My brother held on to his legs. We then worked together to carry him down from the third storey."

They eventually brought him to an open stairwell where he could sit.

Mr Lee said that he had studied and taught art in Shanghai, China, for 15 years. He also had stints as an art teacher at primary schools in Singapore. His daughter teaches at the National University of Singapore's Centre for English Language Communication.

After the incident, Mr Lee said he felt a bit uncomfortable initially, then dizzy.

A 67-year-old woman living on the fourth floor, known only as Ms Zhang, told Wanbao she saw thick smoke billowing from the third floor when she looked down from her flat.

"I immediately ran down and screamed 'Fire, fire!', and tried to wake up and inform neighbours. They also started running down the stairs," she said.

She instructed her neighbour - an Australian woman who had earlier helped to cover Mr Lee with a wet towel - to dial 995 for assistance.

Electricity supply on the third and fourth floor was cut off after the fire. The town council sent personnel to inspect and repair the electrical wires at around 10am.

The SCDF sent two fire engines, one Red Rhino and an ambulance to the scene, but the fire, which involved electrical wiring outside the unit, was put out by the police using fire extinguishers before the SCDF's arrival.

A man and two women were treated for smoke inhalation but refused to be taken to hospital.