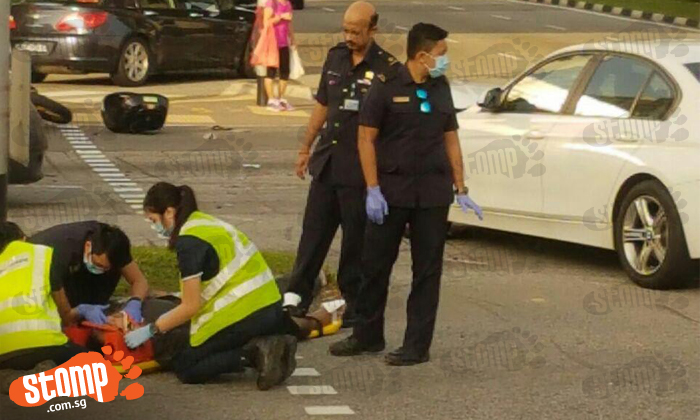 Stomper Andy witnessed the aftermath of an accident at the traffic junction of Yishun Avenue 2 and Yishun Avenue 7 on Tuesday morning (Feb 14).

According to Andy, a white BMW appeared to have made an illegal turn at the junction, but had collided with a motorcyclist.

In the photos he sent to Stomp, paramedics can be seen tending to a casualty on the road.

The BMW is in the middle of the traffic junction with an open rear boot, while the motorcycle is lying by the side of the road, at the pedestrian crossing.

A stray wheel and debris from both vehicles can also be seen scattered across the road.

"On 14 February 2017 at 8.16am, the police were alerted to an accident that happened at the junction of Yishun Avenue 2 and Yishun Avenue 7 involving a car and a motorcycle.

"The 33-year-old motorcyclist was conscious when he was conveyed to Tan Tock Seng Hospital.