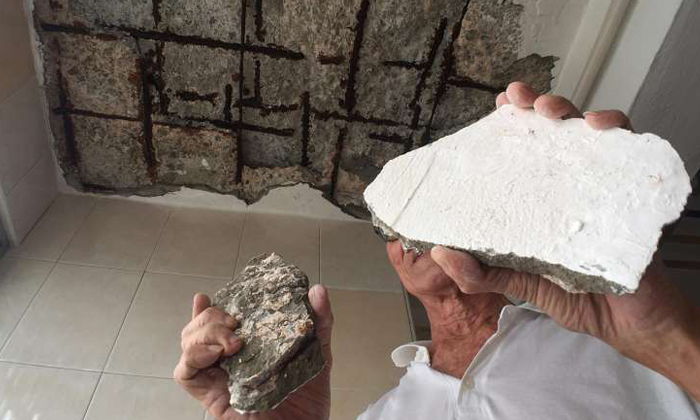 A 70-year-old woman who got up in the middle of the night to visit the washroom got a rude shock when parts of the kitchen ceiling "about the size of a mahjong table" crashed to the floor in front of her.

The incident happened at Block 51, Marine Terrace, on Monday (Feb 6) at about 2.30am, Shin Min Daily News reported on Tuesday (Feb 7).

Retiree Chen Xiuying told Shin Min that she had been on her way to the washroom when a large slab fell from the kitchen ceiling about 2m away from her.

The slab was about an inch thick, with the total surface area of the broken pieces about the size of a mahjong table, she said.

"I'm lucky - if I were any earlier I could have been hit by the concrete," said Madam Chen.

She now uses an umbrella as a shield when she goes to the washroom.

Madam Chen's husband, retiree Li Zhanwu, told Shin Min that they have lived at the two-room rental flat for 18 years.

"It is so fortunate that no one was hurt, but I hope this will not happen again," he said.

The Straits Times understands that there was a prior incident of spalling concrete in the couple's flat.

HDB told The Straits Times on Tuesday that they received feedback on the incident on Monday morning and dispatched officers to the flat immediately.

"The incident arose from spalling concrete, which is largely due to a natural deterioration process which may occur in older buildings. In this case, the flat mentioned is 43 years old," said the spokesman.

HDB said its officers have cleared the debris and will be carrying out repair works in the unit.

"As this is a rental flat, we will bear the full cost of repair. We will continue to keep in close touch with the couple and do our best to assist them," said the HDB spokesman.

HDB added thatspalling concrete could arise from wear and tear of building materials as flats age.

It stressed that it is important for residents to carry out regular checks and repairs in their flats to keep them in good condition.

Those who need more information or assistance on the repair of spalling concrete are advised to contact HDB.