If you clamp an ambulance's wheel, what happens in an emergency? 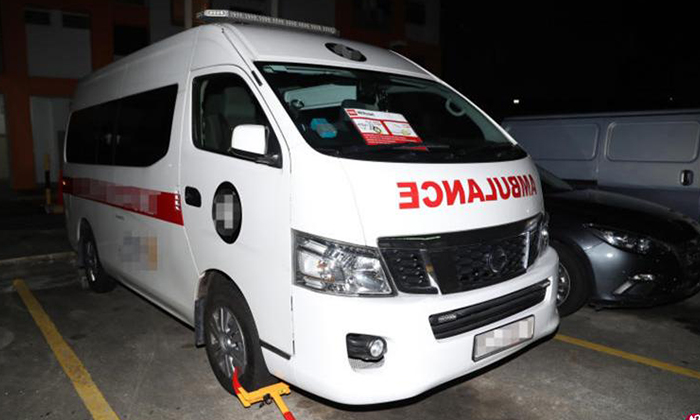 An ambulance which was parked at a cargo loading bay had its wheel clamped by the parking lot’s management.

The incident happened at a multi-storey carpark in Block 762A Jurong West Street 75 on Tuesday (May 30), at around 4.30pm, reports Lianhe Wanbao via Lianhe Zaobao.

A concerned resident who was worried that the clamp might result in precious time loss in emergency situations informed reporters.

The resident said that he was on the way to do some grocery shopping when he discovered the ambulance at the loading bay between the supermarket he was going to.

He added that the ambulances are used in emergencies and time lost can mean the loss of precious lives.

Although parking on the loading bay was a violation, but clamping the wheel could be detrimental too.

“The ambulances are activated in emergencies.

“If they only found out that their wheel had been clamped upon getting activated, it'll definitely result in precious time lost.”

When reporters reached the scene, they observed that the ambulance was still at its original spot, with its left front wheel clamped.

The vehicle was a St. John Singapore ambulance, and there was no one onboard.

There was also a notice on the windshield of the ambulance, stating that the vehicle had violated parking regulations and a fee of S$214 was required in order to undo the clamp.

A employee from the company managing the parking lot, Wilson Parking, told reporters that they had only enforced the clamp after receiving complaints from residents.

“The ambulance had been parked here for some time and it obstructed other users, so we had no choice but to clamp its wheel.”

In response to media query, a spokesperson from St. John Singapore said that the organisation is currently investigating the incident.