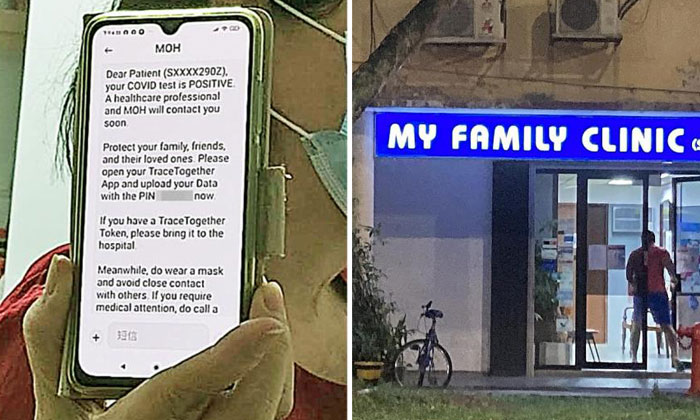 When Madam Tan Poh Choo, 70, received a message on Oct 2 informing her that she had tested positive for Covid-19, she was shocked.

She had no symptoms, no pain and had not visited My Family Clinic - which sent the message - since June.

Speaking to Chinese-language newspaper Shin Min Daily News, the housewife said she spent one week in fear after a slip-up by the clinic, which mistook her for another patient with the same name who had a positive polymerase chain reaction test result.

While the clinic's staff from its St George's Road branch eventually called her two days later on Oct 4 to inform her of the mistake, Madam Tan received official confirmation in a letter that she was not a Covid-19 case only on Oct 9.

This meant that for a week, the elderly woman did not dare to leave the two-room Housing Board flat she shared with her husband as she did not receive authorisation to do so.

And when she received a call on Oct 5 asking her to pack her belongings to move to a facility for isolation, she was so scared she burst into tears.

Madam Tan told Shin Min : "When I received the call, my mind was blank. I didn't want to leave my family, but I was more worried about being alone in an isolation facility."

In response to queries from The Straits Times, My Family Clinic said: "It was a regrettable error on our part due to the mix-up of identical names and heavy patient load during this period of time.

"When the error was detected, our clinic staff reached out to (the Ministry of Health's) Case Management Task Group immediately to rectify the records."

It added: "Our clinic staff visited Madam Tan on three different days at her residence as a form of support and (to render) assistance (with) inquiries."

The clinic said it treats the matter seriously and has since tightened its processes.

Madam Tan told Shin Min that she had feared the potential stigma of her neighbours seeing her escorted by healthcare workers to a community isolation facility.

She added: "Actually, even if someone gets the virus, we shouldn't view him in a different light because nobody wants to fall sick."

Still, it was a relief when her TraceTogether test status was finally cleared on Oct 11 - nine days after she was first notified.

Related Stories
S'pore man shares how he overcame his fear of getting vaccinated in hope of encouraging others
Over 800 diners unvaccinated against Covid-19 found eating at hawker centres in past week: NEA
SCDF full-time national serviceman who left home despite showing Covid-19 symptoms jailed
More About:
Covid-19
elderly
clinic