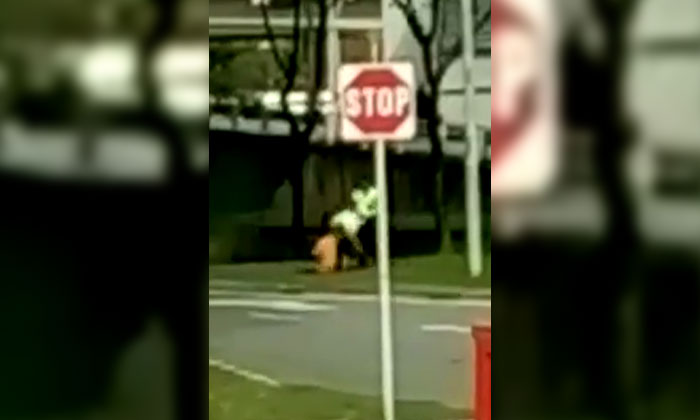 Two Immigration and Checkpoints Authority (ICA) officers who were caught on video hitting a truck driver on Friday (Dec 21) have been taken off operational duties, ICA said.

In the video, the two officers wearing fluorescent vests are seen confronting a man sitting on a grass patch next to a road.

One of the officers lunges towards the man who then falls on his side.

They are then seen pointing fingers at the man while talking to him.

ICA said in a statement posted on their Facebook page at about 9.37am that they are aware of the incident that happened near Woodlands Checkpoint on Dec 21 at about 4.40pm.

"Preliminary investigations showed that the two officers, who were performing traffic control duties at Woodlands Crossing, were directing the container truck which was on its way to Woodlands Checkpoint for departure clearance," it said.

The truck driver, who was travelling on the rightmost lane of the three-lane carriageway, disregarded the officers' instructions and reportedly drove recklessly across three lanes into the officers' direction, endangering the lives of the officers and of other road users.

The officers then confronted the driver and engaged in a physical altercation with him.

In its statement, ICA said it takes a serious view of the incident:

"Our officers are expected to discharge their duties professionally.

"ICA does not condone such behaviour, even if the driver may have disregarded the safety of others, and has referred both officers to the Police following our preliminary investigations.

"The officers have also been taken off operational duties pending the Police investigation."

Related Stories
Man shouts vulgarities at female driver for her 'attitude': "You're a woman you know!"
Malaysian motorist shoves Merc driver after getting confronted for driving recklessly at North Bridge Rd
What's going on here? Cabby and Grab driver hurl vulgarities at each other
More About:
ICA
dispute
fight
confrontation