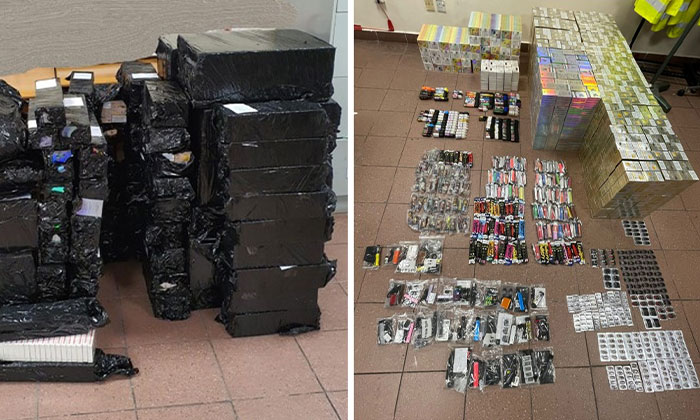 An attempt to smuggle some 21,737 e-vaporisers and refill pods concealed in a lorry entering Singapore went up in smoke last Friday (Feb 11).

The Malaysia-registered lorry, which was transporting a consignment of assorted beverages, was stopped for checks at the Tuas Checkpoint, the Immigration and Checkpoints Authority (ICA) said in a Facebook post on Wednesday (Feb 16).

The Malaysian driver was referred to the Health Sciences Authority for further investigation.

The number of contraband cases detected at ICA checkpoints fell by about 33 per cent to 27,000, down from 41,000 in 2020. The agency attributed this to the low volume of travellers.

However, the authority noted a 40 per cent spike in attempts to smuggle contraband among imports of low-value goods, with 5,860 such cases detected.

ICA told The Straits Times that the most commonly smuggled contraband included e-cigarettes and its accessories, and pharmaceutical products.

These constitute about 80 per cent of all contraband cases detected among imports of low-value goods.

In other cases, huge consignments of contraband cigarettes and drugs were found hidden within legitimate consignments transported by lorries.

ICA noted how in some of these cases, offenders used sophisticated methods of concealment to hide contraband cigarettes.

These include concealing them in air-conditioning units, rolling paper drums and ventilation fans.

ICA warned that similar methods of concealment may be used by terrorists to smuggle arms and explosives into the country.

It said it will continue to conduct security checks to detect and deter such smuggling attempts, to safeguard Singapore's borders.

On 11 Feb, ICA officers at Tuas Checkpoint foiled an attempt to smuggle 21,737 e-vaporisers...