Ian Fang and Carrie Wong's leaked texts: Lawrence Wong hits back at them badmouthing him 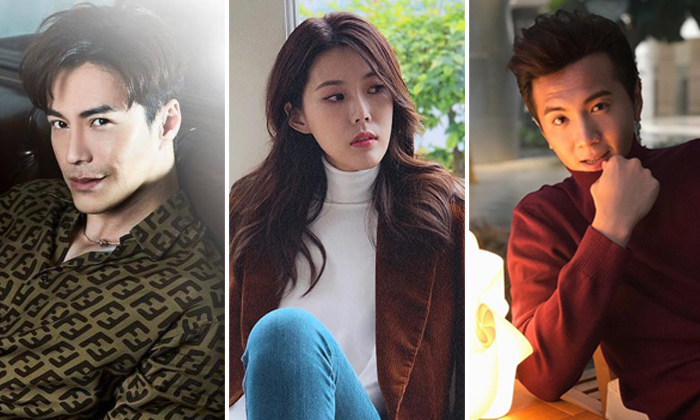 Actor Lawrence Wong has hit back following the leak of private messages between Mediacorp stars Ian Fang and Carrie Wong - who criticised him in one of their exchanges.

In an Instagram post on Tuesday (May 14), Wong quoted from a published interview with entertainment magazine 8 Days, where he detailed his journey from "the lowest level" to becoming the well-known actor he is today.

The 36-year-old, who began his career in Channel 8 dramas, shot to fame last year after he was cast as a kind imperial guard, Hai Lan Cha, in The Story Of Yanxi Palace - one of China's most popular dramas in recent years.

He added in the post: "During the interview, I didn't realise I gave the perfect answer to all the naysayers who think that my achievements are due to 'good looks', 'connections' or just simply 'luck'."

an excerpt from my latest cover story interview with @8dayssg: . “I’m proud of my whole journey as an actor. To put it bluntly, I started off at the lowest level. I had no backing from a rich company. The TV station didn’t want to sign me. I didn’t come from a competition and was immediately given substantial roles. I really started from the lowest point. Back then I could barely survive and I had to do hosting gigs which I’m not good at. I hated hosting but I had to do it to survive. I stumbled here and there and I honed my craft slowly bit by bit. I made a lot of sacrifices. I ate a lot of shit to slowly become who I am today. So I don’t think it’s just about going to China. I think my whole process, if I dare say, is a good lesson for everyone. No one wanted me. I was really at the bottom.” . during the interview, i didn’t realize i gave the perfect answer to all the naysayers who think that my achievements are due to “good looks”, “connections” or just simply “luck”.

Although he did not name anyone, netizens are speculating that his post, which has garnered over 11,000 likes, is a thinly veiled reference to the leaked chats between Fang, 29, and Carrie Wong, 25.

The latter is currently working with Lawrence Wong on an upcoming Channel 8 production - My One In A Million. He was chosen as the leading man after the original lead - actor Aloysius Pang - died earlier this year (2019) in military training incident.

In a video circulating on the Internet which shows the leaked exchanges, Carrie Wong asks: "How can (Lawrence Wong) even compare to Aloysius?"

And Fang says: "You have to win him and let him know that we don't rely on connections, looks or luck."

The leaked exchanges also show the two stars grieving for Pang, with Fang consoling Carrie Wong at one point.

The two have since apologised for what they said, including messages suggesting a physical relationship between the two although they are said to be dating other people. They have denied being in a relationship with each other and clarified that their messages were not meant to be taken seriously.

Chinese paper Shin Min Daily News reported on Wednesday (May 15) that Carrie Wong has also apologised to Lawrence Wong directly. He was quoted as saying: “She was very calm when she apologised to me. I’m very thankful that she said sorry so graciously.”

On Wednesday evening, Carrie Wong uploaded a photo of her with her co-star and apologised to him.

Thank you for being the bigger person. Despite everything you lend me your listening ear and offer me words of encouragement. I've learned and will keep learning. Once again, I'm sorry.

She said: "Thank you for being the bigger person. Despite everything you lend me your listening ear and offer me words of encouragement. I've learned and will keep learning. Once again, I'm sorry."

Her boyfriend Boris Lin commented on her post: "I will always be on your side."

Mediacorp's artist management arm, which manages both Fang and Carrie Wong, has said that the stars' conversations were "distasteful and inappropriate", but noted that it was a "private exchange conducted in jest".