'I thought we were all finished': S'pore family kicks windows to escape after car overturns in Johor 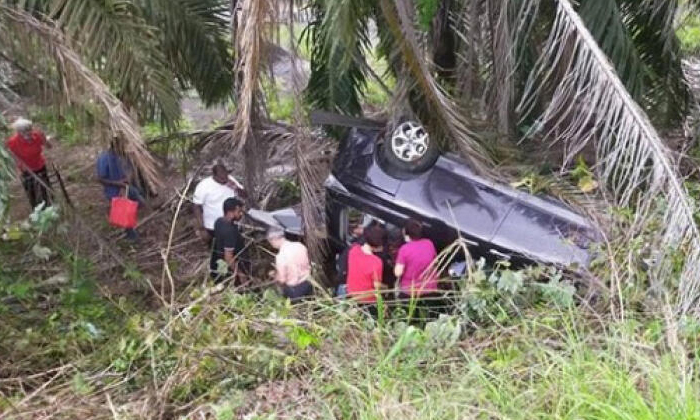 A Singaporean family's trip to Johor took a frightening turn when the car they were travelling in swerved off a road to avoid a motorcycle and overturned at an oil palm plantation.

Desperate to flee but unable to open the car doors, the five people trapped in the car kicked and smashed the windows to escape.

The harrowing incident took place on Sunday (May 1) at around 11.30am along Jalan Nyior-Kluang in Johor, Malaysia.

The car driver, who wanted to be known only as Mr Soh, 60, said they were lucky to escape with minor injuries. He was travelling with his wife, his older sister and her husband, and his younger sister.

The family had left Singapore at around 5am on Sunday morning and intended to spend the long weekend in Malaysia.

They were on their way to Kluang after touring a historical Chinese new village in Chamek. Both places are in Johor.

Kluang district police chief Low Hang Seng said in a statement on Monday that the driver was trying to avoid a motorcycle coming from the opposite direction.

"Due to the slippery road conditions, the complainant's car skidded and landed in some bushes on the left side of the road," said Assistant Commissioner of Police (ACP) Low.

Mr Soh, who owns a construction business in Singapore, said the motorcycle had abruptly overtaken a car that was travelling in the opposite direction so he had to swerve his vehicle to avoid colliding with it.

"It happened so quickly. The car flipped upside down and all four wheels were facing the sky. At that moment, I thought we were all finished," he said in Mandarin.

Mr Soh added that his family kicked the car windows with all their might until the windows broke, and then climbed out of the vehicle.

"Luckily, everyone made it out with just some bruises. I dare not imagine if the injuries were more serious," he said.

Officers from Malaysia's Traffic Investigation and Enforcement Department, as well as passers-by in the area, came forward to help Mr Soh's family out of the plantation.

"Those who heard the commotion came immediately to help pull us out. We are very grateful to them," said Mr Soh.

He added that the motorcycle he had swerved to avoid was gone by the time he got out of the car.

The family was sent to a nearby hospital for treatment. They returned to Singapore that same day via private-hire cars.

In his statement, ACP Low called on road users in Malaysia to drive carefully and obey road regulations, especially during the Hari Raya Puasa festive season.

"Road users in the Kluang district are also advised to be vigilant on certain roads where wild animals such as elephants, tapirs and others are crossing," he said.

When driving in other countries, take extra care and be on the lookout for danger, said road safety experts.

Here are some of their tips on how to stay safe while driving abroad:

1. Familiarise yourself with road signs and rules

Road signs abroad may differ from those in Singapore, for instance, signs warning of falling rocks or bridge crossings, and drivers here may not have encountered them before. Ignoring them could be dangerous as drivers would not be aware of potential hazards.

2. Ensure your vehicle is suited to road conditions

Having suitable tyres if snow is expected, for example, will go a long way to keeping you safe. Take some time to find out where all the controls are in the car, if you are not driving your own, and practise to build confidence.

When driving in unfamiliar territory, it is important to stay alert. This means not driving immediately after a long flight or late night out.

Get advice from those living in the area about any dangerous spots, especially when driving in rural or mountainous areas, so you can keep a lookout for unexpected situations.