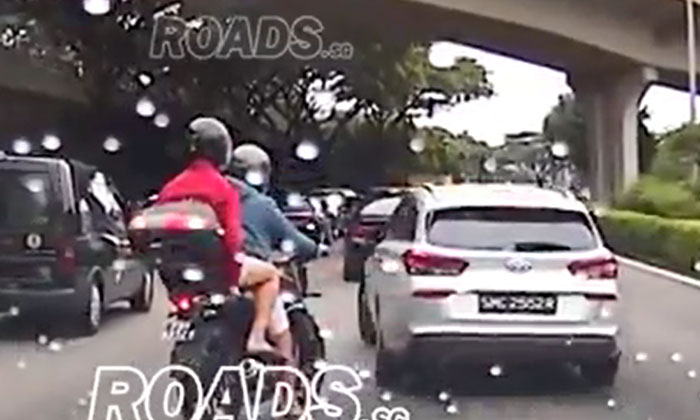 A silver Hyundai, with license plate SMC2552R, was captured on video intimidating a motorcyclist and pillion rider by dangerously swerving and driving between lanes by blocking the way.

Stomper Mr Tan alerted us to the video which was posted on Facebook page ROADS.sg.

According to the Facebook post, the incident took place along the Pan Island Expressway (PIE) towards Jurong on Oct 14.

In the video, a motorcyclist and a pillion rider were heading straight on when they encountered the Hyundai which did not let them pass.

There was a congestion caused by roadworks which blocked the extreme right lane.

It flashed its hazard lights as it continued blocking them by swerving between lanes.

At one point, the motorcyclist tried to switch to the lane on its right, which was the lane the silver car was in.

However, the silver car came to a complete stop.

The motorcycle bumped into the car and also came to a complete stop.

The car continued driving and flashed its hazard lights.

After stopping, the motorcycle was forced to drive on the extreme right lane, but there was a stationary truck on the road with safety cones beside it because of the roadworks.

The Hyundai continued to block them and the motorcycle could not filter left to join the flow of traffic.

It was forced into the blocked lane and swerved between safety cones.

The motorcyclist appeared to be angry and showed a clenched fist to the driver of the Hyundai.

The Hyundai sped up and the motorcycle seemed to chase it.

The car driver flashed his hazard lights again and swerved left, blocking the motorcycle from passing.

The video ended with the Hyundai speeding up and joining the extreme right lane, while the motorcyclist continued on.