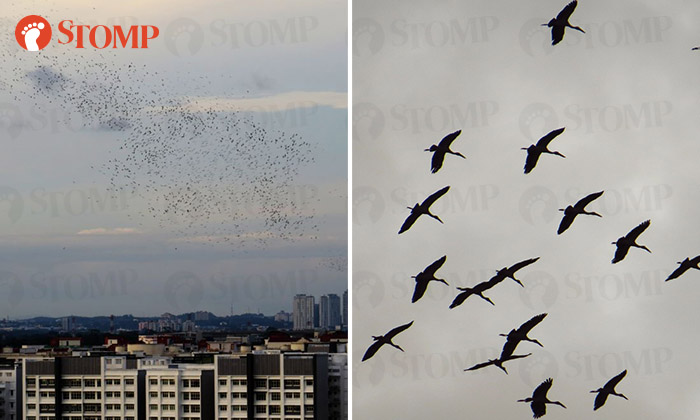 Did you spot a huge flock of birds flying on Sunday evening (Dec 22)?

Several Stompers were lucky enough to catch the magnificent sight as these birds flew in amazing formations and contributed videos to Stomp.

Stomper Irwan was sending his son home at about 5.45pm on Sunday (Dec 22) when he noticed the birds.

He contributed a photo and a video of what he saw and told Stomp: "We were in the Keat Hong area, near Choa Chu Kang Avenue 7.

"I saw this whole group of birds and started taking a video of them.

"I didn't manage to see any of the birds up close but they were very huge.

"My friend, who's a freelance photographer, took the photo of the bird.

"Not very sure what kind of bird this is but I think it's an Asian openbill stork.

"When I first saw this group of birds flying above, I told my son about it and joked: 'Maybe they're having a tour around the island.'

"As I was driving home, I saw a lot of people standing by the roadside taking videos and photos of the birds.

"I felt very excited when I saw these birds. Usually you'd see about one to two, or maybe just a few, but this is a huge group!"

Stomper Neo was at her mother-in-law's place at about 6.15pm on Sunday when she saw the birds.

"I was in the kitchen and when I looked out of a window, I noticed the birds.

"The big flock of birds was very obvious.

"It's my first time seeing these birds and in such a huge flock.

"We were thinking if this could be due to climate change."

Neo's concerns about climate change were also echoed by another Stomper.

Stomper Joe said: "I saw thousands of storks flying at about 6pm on Sunday.

"This is impressive but could it also be due to some abnormal weather conditions around the world?"

A similar sighting was previously reported where the birds were identified as Asian openbill storks.

The storks usually forage for prey like water snails in the rice fields of South-east Asia, but they could fly elsewhere for food if there is less available for them.