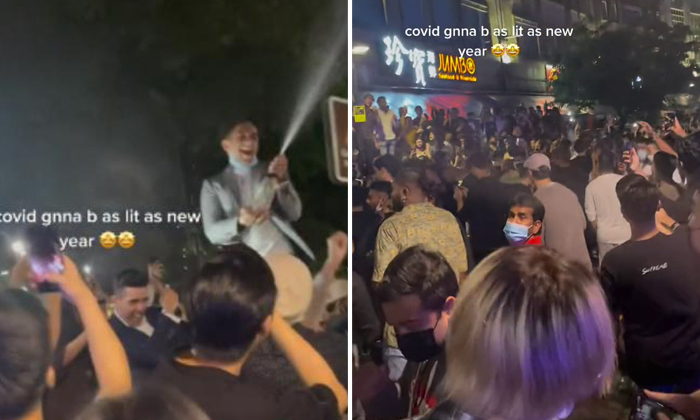 Enforcement agencies are looking into a potential superspreading event with blatant breaches of safe management rules at a gathering of revellers on New Year's Eve in Clarke Quay.

The incident was caught on video and is believed to have involved hundreds in a spontaneous countdown party.

In a statement on Sunday (Jan 2), the multi-ministry task force tackling Covid-19 urged the public to be responsible.

It said: "The New Year's Eve gathering at Clarke Quay involved some blatant breaches of safe management rules and is a potential superspreading event.

"We understand the desire and enthusiasm to usher in the new year, especially after two years of social restrictions. As a society, we have done what we can to build up our resilience. But we would like to remind everyone that we are still in the middle of a pandemic crisis, and we still need to exercise civic responsibility.

"If everyone continues to do our part, the situation will continue to improve, and we can look forward to 2022 being a significantly more normal year."

Videos of the event uploaded on social media showed hundreds gathered in front of Riverside Point.

The rowdy crowd can be seen cheering, singing, celebrating and counting down to the new year. Many had their masks pulled down.

One man was seen standing on an elevated platform pouring a liquid from a bottle into the crowd surrounding him.

The staff of shops and restaurants in the area said the eateries had closed by 10.30pm, and many staff had already left the area by 11.30pm after cleaning and closing up.

All of them said there were large crowds in the area at the time, and many large groups of young people.

A manager of a restaurant who did not want to be identified said there were safe distancing ambassadors in the area during the eateries’ operating hours on New Year’s Eve.

He added that he was unsure why the crowds had gathered closer to midnight.

A staff member of another restaurant said he saw police patrols and that the crowd became increasingly rowdy.

“The youngsters are very wild and like to party,” he said.

“We saw police in the area taking down details of some people before midnight.”

He added that there was trash all over the outdoor area at Riverside Point on New Year’s morning.

“There was trash up and down the stretch, including on our outdoor premises,” he added.

“There were many alcohol bottles and cans, and cigarette butts. But thankfully, none of our furniture was damaged.”

He also said the Riverside Point building was closed that night, with entry into the mixed-use development’s premises, including the outdoor areas, restricted when he left at about 11.30pm. However, he was not sure if entry restrictions were enforced.

Pov: you are too old to celebrate New Years at Clarke Quay

A worker at a convenience store which was open overnight said there were large crowds gathered just outside Riverside Point, and he could hear cheering and shouting for hours.

The 43-year-old, who did not want to be identified, said he also heard sirens.

“We know large crowds of young people had gathered, but we didn’t go out to actively see what was going on because we are used to such crowds on public holidays like Christmas Eve and New Year’s Eve,” he added.

“It was only at about 4am that the crowds started to dissipate.”

Several people who worked in the eateries in the area said they believed the crowds were largely made up of foreign students.

They also questioned why there was a lack of crowd control measures.

One staff member of a restaurant said: “The gathering appeared to be spontaneous, but the authorities should have foreseen this. They didn’t seem to have enough people deployed to the area to control the massive crowds.”

When contacted by ST, Jalan Besar GRC MP Wan Rizal Wan Zakariah said that the area where the gathering was held is not within the town council’s common property area and hence not under its purview.

Dr Wan Rizal, who is also town council chairman, added: “I am concerned by the lack of safe management measures and hope that the relevant authorities will look into this case. I am sure that they will provide an update in due time.”

Dr Leong Hoe Nam, an infectious diseases specialist from the Rophi Clinic, said a superspreading event would thrive on such situations and called the revellers “selfish” and “irresponsible”.

“But the counter argument is we are going endemic. The numbers will rise like in New York or any other city in the Western world that has seen Omicron. We are dealing with the inevitable,” he said.

But Singapore is in it together as a country, and “no one has the privilege of rising above the law”, he added.

Dr Leong said: “'While I empathise with the desire to party, this blatant disregard smacks of elitism. It destroys the social fabric of how communities live and work together.

“And this is the exact sort of attitude we must discourage during a national crisis."

ST understands that there were police in the area that day.

ST has also contacted the Ministry of Sustainability and the Environment and the Urban Redevelopment Authority for comment.