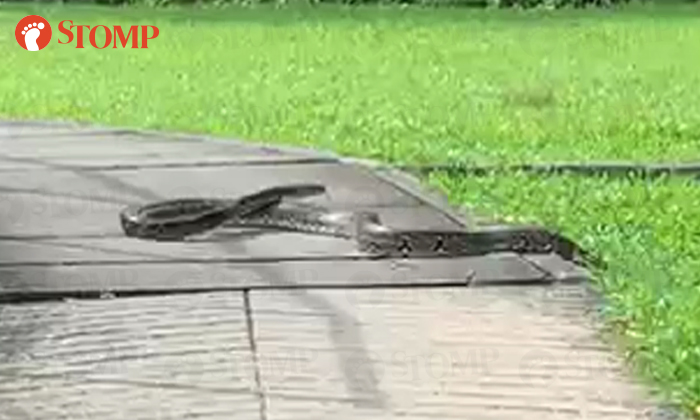 A couple were out cycling in the vicinity of Geylang Park Connector on Tuesday morning (Dec 8) when a large python stopped them in their tracks.

Stomper Lex and his wife encountered the reptile, which measured around three to four metres long, at around 10.21am.

Lex said: "It was my first time passing by the area so I was surprised to see the snake.

"I was shocked when I first spotted it and literally jumped off my bicycle to stop and warn my wife who was behind me.

"We were too afraid to go near but managed to capture a video."

In the video, Lex can be heard marvelling at the python's size and saying, "Wildlife in the city" as the creature slithered away into a canal.

The reticulated python is occasionally encountered in urban areas and is native to Singapore. It plays an important role in regulating the ecosystem by naturally keeping numbers of pests, such as rodents, low.

Those who see any wildlife in distress can call Acres' 24-hour wildlife rescue team at 9783 7782 or the National Parks Board (NParks).