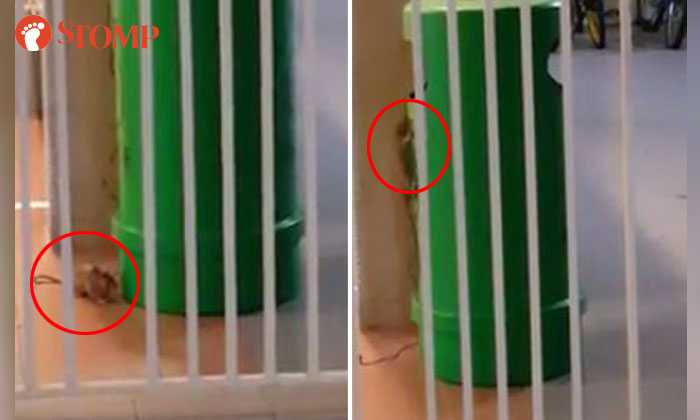 Stomper Sarah filmed a video showing a huge rat trying to get into a rubbish bin at Block 150, Mei Ling Street in Queenstown on Sep 22.

From the video, the rat can be seen jumping numerous times in a valiant attempt to get inside the rubbish bin. However, according to the Stomper, this was far from being the only rat that she has seen.

According to the Stomper, there are many more rats out there under her block and at the surrounding blocks as well.

In a telephone interview with Stomp, she stated, "The video was taken in August. The pictures attached of the rats under her block were taken recently on Sunday (Sep 24).

"This has been an ongoing problem for quite some time now. My other neighbours said they first saw the rats two to three months ago."

Sarah elaborated, "You can see so many rats below my block and it's not just my block too. When you walk out of Queenstown MRT station and onto the footpath, you can see some rats running around. They are very bold, you know. They just run around in broad daylight."

She added that her husband had also found what he presumed to be rat droppings under their kitchen sink, though this is unconfirmed as she has yet to see a rat in her house.

She stated, however, that it would be "no surprise" if they are indeed rat droppings due to the large numbers of rats below her block.