Owl looks down at passers-by at Bukit Batok West 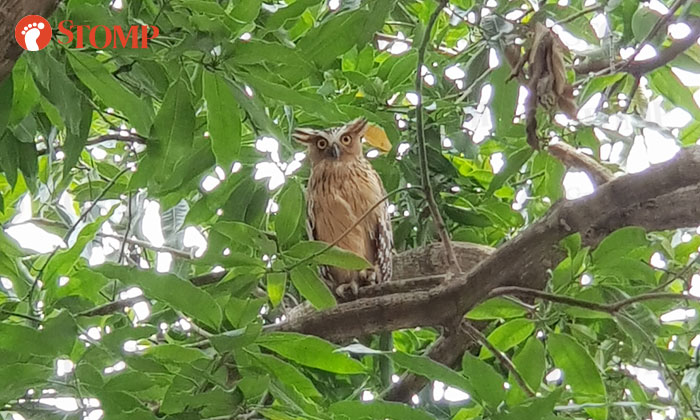 Stomper M and her family were excited when they spotted an owl sitting in a tree next to Block 186 Bukit Batok West on Sunday morning (June 17).

M and her family were heading out for breakfast when they spotted a crowd of people looking up at a tree.

"There were about 10 people and they were all taking photos," she said.

"We were surprised and excited seeing the owl up there too."

She told Stomp that this is the first time she has made such a sighting.

"It was huge, about the size of an adult stray cat," she said.

"My son thought that it might have escaped from Jurong Bird Park."

M said that when they returned from breakfast two hours later, the owl was still in the tree.

From M's photos, the owl's prominent ear tufts and tawny feathers indicate it might be a buffy fish owl, also known as the Malay fish owl.

They are known to find shelter in densely foliaged trees during the daytime and feed on fish, crabs, frogs as well as toads and crayfish.

Buffy fish owls are among the rare resident owls found in Singapore and have been seen at Pualau Ubin, Pasir Ris Park, Sungei Buloh Wetland Reserve and the Singapore Botanic Gardens.

Related Stories
Knock, knock... hoo's there?
PM Lee's 'silent watcher' visits him at Istana again for the 3rd time in 5 years
Lost owl hangs out at staircase before flying and crashing into glass wall in Temasek Polytechnic
More About:
owl
birds
animal sighting