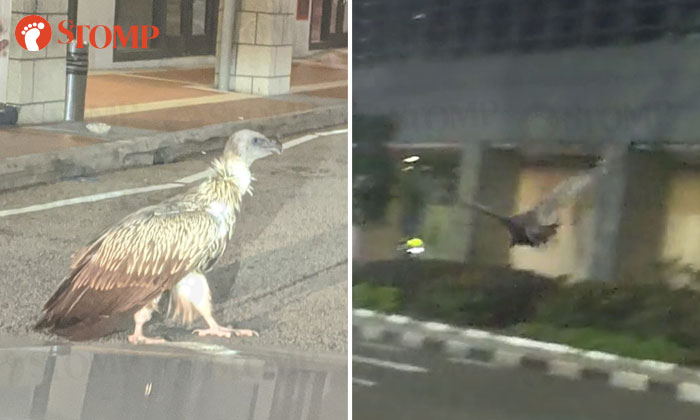 Motorists travelling along Peck Seah Street towards Maxwell Road were treated to a rare sight of a Himalayan griffon vulture on Wednesday evening (Jan 8).

Stomper Win alerted Stomp to the sighting and shared a photo and video his girlfriend took of the huge bird that she posted on her Facebook page Kirari Labo.

"It was near 72 Peck Seah Street towards Maxwell Road at about 7pm," said the Stomper who was driving at the time.

This isn’t a joke. This thing was HUGE!

"I'm not sure why the bird just stayed in the middle of the road.

"Luckily, there was not much traffic in the area so most of us just slowed down to pass by it."

"They are rare visitors to our island.

"If sighted on the ground, do not approach them and give them space.

Himalayan griffon vultures are typically found within the Himalayan region in Central Asia.

They are the second-largest vultures in Asia with wingspans that can range between 2.6 to 3.1 metres.

They are not migratory birds which is why they are rarely sighted in Singapore. As a result of the long flight, the vultures usually arrive weak and hungry.