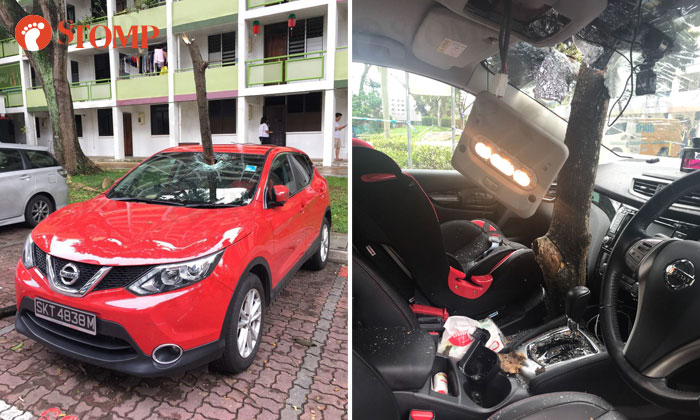 Stomper Philip was shocked when he saw a fallen tree branch had pierced the windscreen of his car he had parked at Block 6 Jalan Bukit Ho Swee yesterday.

The incident had happened at around 2.30pm.

"The tree branch was two metres long and fell from a height of about six storeys," said the Stomper.

He added that the tree which the branch had fallen from was about "11 storeys high".

Philip does not know how much the damage will cost him yet but estimates it to be about $5,000.

In another incident, Stomper Jason was near Block 338 Ang Mo Kio Avenue 1 at around 5.45pm yesterday when he saw a group of workers sawing a tree that had fallen onto the block.

"The tree was uprooted and the tree trunk fell onto the roof of the two-storey block," said Jason.

"It had caused part of the concrete to crack and fall off the building.

"At around 6.30pm, the whole tree had been cut down and removed."

There have been several reports of trees toppling in Singapore over the past week.

A massive tree uprooted and fell near a playground in Yishun on Jan 12.

A day later, another tree in Yishun had fallen onto a row of parked cars.

The National Environment Agency (NEA) had posted an update on its Twitter account yesterday at 5am to expect cloudy and windy weather with light to moderate rain in the morning and afternoon.

Due to a monsoon surge in the South China Sea, Singapore has been experiencing bouts of heavy rain and a rush of cool air with temperatures dipping below 22 degrees Celcius.