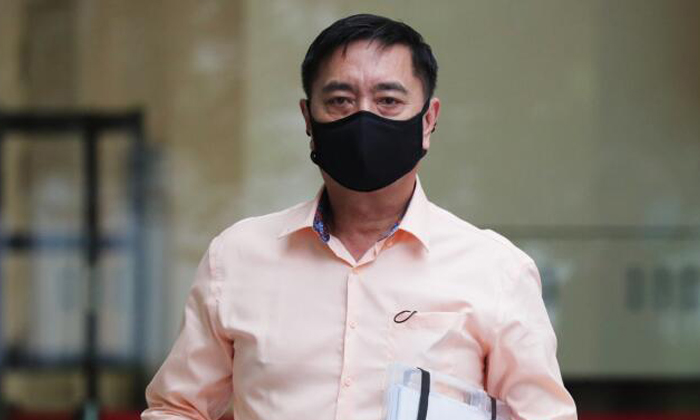 Former actor Ng Aik Leong started serving a 10-month jail term for assaulting his employee with a metal scraper, after the High Court dismissed his appeal against his conviction and sentence on Friday (Feb 4).

He looked around the courtroom after Justice Aedit Abdullah asked if he wished to start serving his sentence or postpone it, before stating through an interpreter that he was prepared to begin his sentence immediately.

Ng used a metal scraper to hit Bangladeshi worker Jahidul twice in the abdomen and once on the head at the Singapore Islamic Hub in Braddell Road at around 4.30pm on Dec 11, 2018.

As a result, Mr Jahidul, who goes by only one name, suffered injuries to his scalp and torso.

Justice Abdullah said he had no hesitation in rejecting Ng’s defence that the victim had consented to Ng assaulting him.

The judge accepted that 10 months’ jail was justified, given the history of verbal and mental abuse Ng had inflicted on the migrant worker, who was in a position of vulnerability.

He also upheld an order for Ng to pay the victim $3,300 in compensation.

He was found guilty by a district court in January last year of one count of causing hurt by a dangerous weapon following a trial. Mr Jahidul, 35, testified that Ng frequently yelled at and threatened him, even challenging him to fights.

On Dec 11, 2018, Ng was upset with the worker for not following his instructions while doing cleaning work.

Mr Jahidul told the court that Ng threw a plastic pail and wooden plank at him. The pail struck his back, forcing Mr Jahidul to climb down from a ladder he was on.

Ng then assaulted him with the metal scraper.

Ng, who was not represented by a lawyer during his trial, claimed that Mr Jahidul had given him the right to hit the worker.

He said Mr Jahidul had told him: "I allow you to hammer me because I do things so slowly."

Ng claimed that Mr Jahidul was "acting" and exaggerating his injuries to make them out to be "100 times worse than they actually were".

He left Mediacorp in 2008 to set up a production house.

In September last year, his daughter, actress Chantalle Ng, 26, alleged on a talk show that when she was 11, he beat her so badly that she had to be hospitalised for a week.

The actress, who became popular for her role as a Vietnamese bride in Channel 8 drama My Star Bride, was single-handedly brought up by her mother, veteran actress Lin Meijiao.

Ng responded to the allegations, claiming that he hit his daughter because Lin had told him to play the "bad cop" parent.

Lin, 57, filed for divorce when her daughter was just a few months old.

Those convicted of causing hurt with a weapon can be jailed up to seven years and fined or caned. Ng cannot be caned as he is more than 50 years old.

Ng also faces an unrelated charge of disturbing the public peace. He is accused of fighting with one Mogana Raj Saravanan on June 9, 2018.

This case is scheduled for a pre-trial conference on Feb 23.