How to walk? Common areas of Block 182 Rivervale Crescent cluttered with items 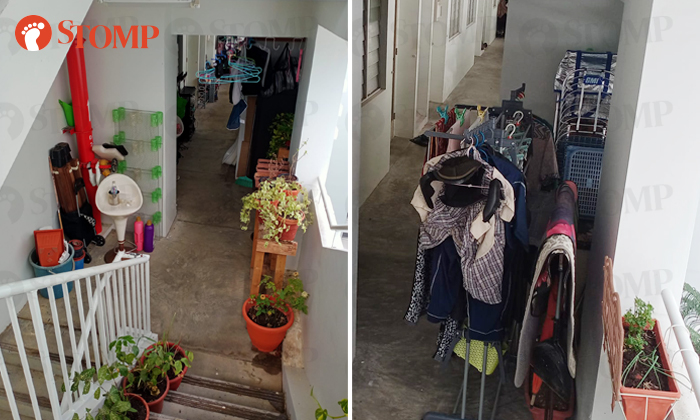 A man was concerned by the amount of clutter he saw at Block 182 Rivervale Crescent when visiting his relative there recently.

These include bicycles and kid's scooters at staircase landings. 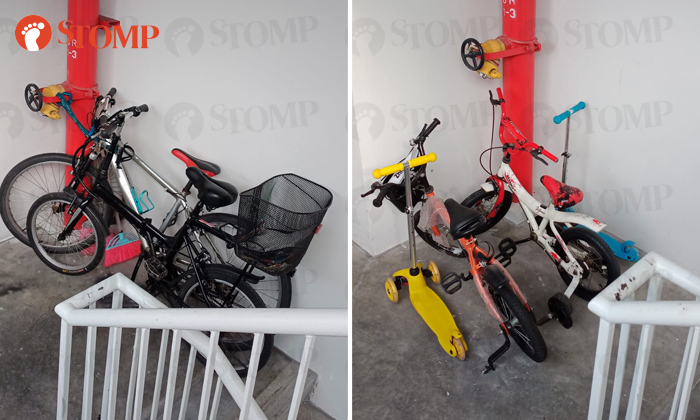 Potted plants can be seen on the steps of staircases, while other bulky items such as a pram and even a basin can be spotted at common spaces.

Lee said: "I have observed many of the units at the block hoarding the walkways, making it rather difficult for residents to move between their homes to the lift lobbies.

"This is also a fire hazard. In the case of a fire, how will residents make their way out of their units through this hoarding? Not to mention those in wheelchairs.

"Another major lapse of safety would be fire reel boxes and fire pipes being blocked by items. This is a matter of safety as firefighters are going to have a hard time accessing these essentials during an emergencies."

Lee said that the situation has continued to persist despite repeated feedback, adding: "I would kindly appreciate if appropriate actions are taken before something really serious occurs, after which it will be too late for corrections. Thank you."

Stomp understands that Sengkang Town Council is in the process of engaging residents on the need to reduce corridor clutter that contributes to the general obstruction of corridors and staircase landings.

In response to Lee's feedback, the town council said on Wednesday (Jan 19): "As residents are facing shortage of storage spaces within their dwellings in this block of rented flat units, we are taking into consideration that certain items such as shoe racks and storage cabinets will be allowed certain flexibilities provided they adhere to Singapore Civil Defence Force (SCDF) guidelines.

"However, we will proceed to distribute advisory notices to all residential units within this block to further advise occupants on the need to reduce obstructions at the corridor spaces and monitor for compliance on severe cases."

View more photos from Lee in the gallery.