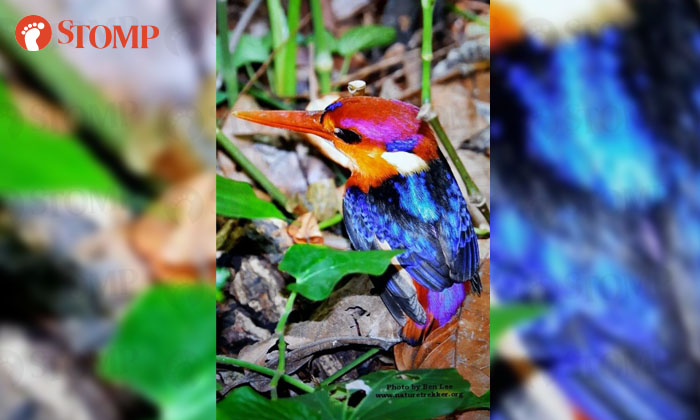 Ben, the founder of Nature Trekker a nature conservation organisation, was walking to People's Park Complex to get breakfast when he spotted the bird from the corner of his eye.

He recounted and said: “I saw a small bird on the floor, maybe four centimetres tall, about four metres away from the taxi stand of Chinatown Point.”

He said he immediately rushed back to his home, which was very nearby, to get an empty clean shoebox to use as a substitute cage.

When he got back to the location, the bird was still there.

He told Stomp he retrieved it carefully, put it in the shoe box and went back home.

“The bird was very relaxed. I think it was in a daze. This usually happens when birds are tired from flying long distances.” he added.

He filled a small container with water and poked holes in the lid of the shoe box to allow for ventilation within the box.

“I stayed at home and observed the bird to make sure it was in good spirits and in an upright perching position.

"Usually, if the bird is lying down, it means it is very sick and might die soon. This bird was fortunately not lying down.”

According to Ben, when he was trying to move the bird to a bigger box, it tried flying out of the box and was running around.

He caught the bird in time and kept it safely.

“I was actually happy to see it move so much. I knew that it was feeling much better.”

At 12.30pm that day, Ben carried the bird in the shoebox and drove it to Fort Canning Park to release it.

Ben said: “I looked for a quiet place with many bushes around, so the area would not be so open. This is to ensure that the bird will be safe.

“The spot I chose also had a big tree which provided it shade from the sun.”

Ben told Stomp he opened the box expecting the bird to fly out but it did not.

He captured a video of the release.

“Actually, I had my camera on standby to film it fly off. But, it was just there moving its head left and right. I took it out of the box and placed it on the floor. It soon walked into the bushes.”

Ben also shared with Stomp that the Oriental Dwarf Kingfisher is also known as the Black-backed Kingfisher.