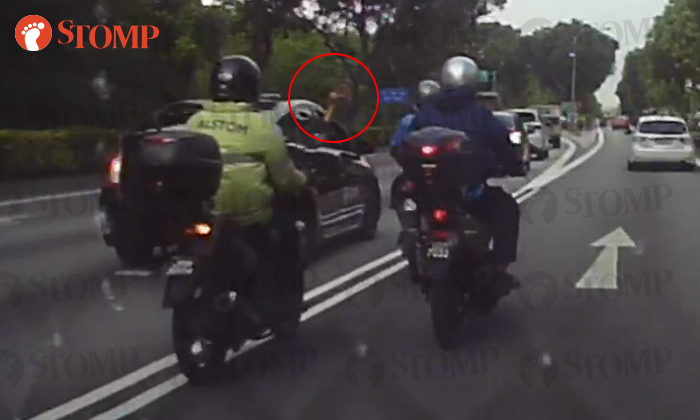 Unhappy about being honked at, a taxi driver flashed his middle finger -- only for a motorcyclist to react with a gesture of his own.

Stomper Rayan was travelling along the Bukit Timah Expressway, towards Woodlands Checkpoint, at around 8.30am on Tuesday (May 21) when he witnessed the incident.

He said: "The cabby was filtering left and blocking the road. He also crossed the double white lines.

"Many motorcyclists honked at the cabby, who rolled down his window and flipped the bird.

"How one of the riders reacted was hilarious."

A video submitted by Rayan shows a motorcyclist lifting his left leg towards the taxi driver.

The Stomper added: "I thought the cabby was rude until I saw what the motorcyclist did.

"They then all went on their own way."

Related Stories
This feel-good, fabulous Friday video is the perfect start to your weekend
If you have time to spare, watch poor van driver try to get out of back lane
When humans think they're cars
More About:
funny
cabby
taxi
motorcyclist
biker