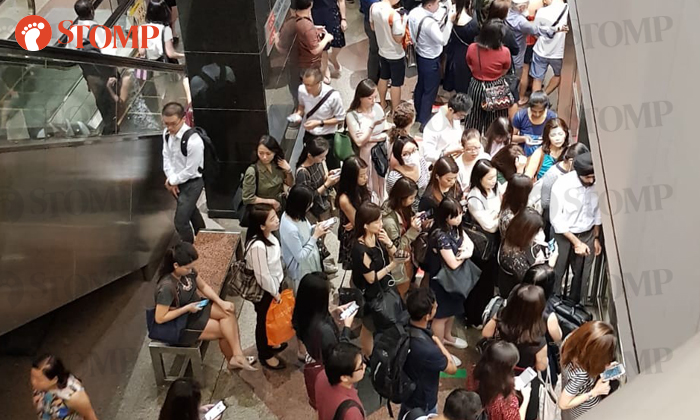 Commuters on the North-South Line experienced a delay in their journey during Tuesday's (Jan 22) morning rush hour due to a train fault at Marsiling MRT station.

The train fault lasted for around one hour.

Stomper E told Stomp that she was at Marsiling MRT station at around 8am when she heard announcements about the train fault.

E, who was headed towards Jurong East, said: "Every few minutes, there were announcements that travelling from Marsiling to Yew Tee would take an additional 30 minutes due to a train fault.

"I ended up being late for work."

At 8.06am, train operator SMRT tweeted about the train fault "from Woodlands to Yew Tee towards Jurong East" and told commuters to add 30 minutes to their travel time.

[NSL]: Due to a train fault at Marsiling, pls add 30mins train travel time from #Woodlands to #YewTee towards #JurongEast.

Several netizens replied to the tweet and said they were also experiencing delays on trains travelling in the direction of Marina Bay.

Both sides are affected. Please update your tweet. I'm taking the train towards Marina Bay and your misrepresentation will cause my boss to question my story pic.twitter.com/ta2lYwYRr6

I'm in Marsiling. Both sides are affected and your tweet doesn't reflect that. This is the train on the platform towards Marina Bay. It's been here for 10 mins and some people are alighting to take the cab. pic.twitter.com/usGdyOfzBJ

Train been affected towards to Marina Bay. Everyone been chase down pic.twitter.com/rV0WVmfSdj

It also said in an update that commuters should add 15 minutes to their travel time. This was subsequently reduced to 10 minutes.

In a tweet at 9.03am, SMRT said that the fault had been cleared and train services were progressively being restored.

"We apologise for any inconvenience caused," it added.

[NSL] UPDATE: Fault cleared, train svcs are progressively being restored. We apologize for any inconvenience caused.

"Train service from Woodlands to Yew Tee has resumed. Free regular bus services have ended," SMRT confirmed at 9.08am.