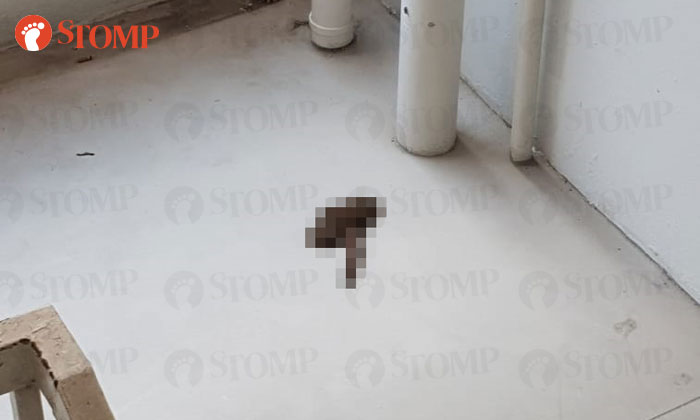 Residents at Block 671 Hougang Avenue 8 received a foul-smelling surprise after finding human faeces at a staircase landing on Mar 29.

Stomper Jeremy, one of the residents, alerted Stomp to the disgusting discovery.

He told Stomp he believes the human faeces was left there the night before he discovered it on Sunday morning.

"I live on the third floor and we wanted to take the stairs down," he said.

"However the poo was between the second and third levels and the smell made it impossible to bypass it.

"It is definitely human as the amount is unlike any animal's poo."

He recalled he saw a man who appeared to be drunk lying on the second floor of his block the night before.

"The smell reached the third-floor lift landing and my neighbour could not take it anymore so he reported it to the town council," he said.

He said the faeces was cleared on Apr 1.

"Even after this month's block cleaning, the stain is still there," he said.

He added this is not the first time this has happened.

"I've seen human faeces at this block at least four to five times over the 30 years I have lived here," he said.

"Despite this Covid-19 situation, there is still this type of uncivilized people around."

Stomp has reached out to the town council for comment.